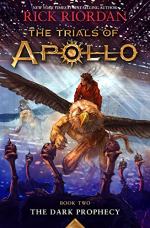 Related Topics
The Lightning Thief: The Graphic Novel
The Battle of the Labyrinth
The Last Olympian
The Lost Hero
The Red Pyramid
The Sea of Monsters
The Serpent's Shadow (2012 novel)
The Son of Neptune
The House of Hades
Percy Jackson and the Olympians: The Demigod Files
The Lightning Thief
The Demigod Diaries
The Titan's Curse
The Mark of Athena
The Blood of Olympus
Percy Jackson and the Lightning Thief
Magnus Chase and the Gods of Asgard, Book 2 The Hammer of Thor
The Trials of Apollo, Book 1: The Hidden Oracle
Magnus Chase and the Gods of Asgard, Book 3 The Ship of the Dead
9 From the Nine Worlds
The Burning Maze
The Trials of Apollo Book Three The Burning Maze
The Tyrant's Tomb
The Tower of Nero
Daughter of the Deep

The Trials of Apollo Book Two The Dark Prophecy Setting

Rick Riordan
This Study Guide consists of approximately 67 pages of chapter summaries, quotes, character analysis, themes, and more - everything you need to sharpen your knowledge of The Trials of Apollo Book Two The Dark Prophecy.

Indianapolis is the wide setting of the novel where everything takes place. It is here that the characters land at the very beginning. Indianapolis is Commodus’s hideout and the place that he plans on starting his takeover of Indiana and a conquest for more. This is also where Trophonius’s Cave is, leading to Georgina’s temporary madness when she searches for a prophecy to save the Waystation and where Apollo and the other characters have to go to learn how to stop the Triumvirate. Everything in the novel happens in some part of Indianapolis.

The Waystation is a magical building that can move rooms around as it wants and was built by the goddess of nets, Britomatis. While only Emmie and Jo live in it at the beginning of the novel, it is revealed that they have provided a safe haven to countless demigod children...

More summaries and resources for teaching or studying The Trials of Apollo Book Two The Dark Prophecy.