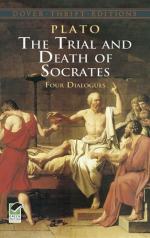 Plato
This Study Guide consists of approximately 29 pages of chapter summaries, quotes, character analysis, themes, and more - everything you need to sharpen your knowledge of The Trial and Death of Socrates.

The Trial and Death of Socrates: Four Dialogues Summary & Study Guide includes comprehensive information and analysis to help you understand the book. This study guide contains the following sections:

This detailed literature summary also contains Topics for Discussion and a Free Quiz on The Trial and Death of Socrates: Four Dialogues by Plato.

This collection of conversations between classical Greek philosopher Socrates and those who question and/or challenge him is one of the earliest, and most significant, works of philosophy in history. Written by Plato, a pupil of Socrates and a noted philosopher in his own right, the four dialogues in this collection take place over a period of time from the beginnings of Socrates' trial in Athens to the day of his execution, and explore themes relating to the nature of existence, the nature of death, and the value of wisdom.

The first dialogue in the collection is given the title "Euthyphro," after the name of the first citizen who engages Socrates in dialogue. The two men encounter one another outside the Athenian version of the law courts, where Socrates is about to go on trial for corrupting the youth of the city and Euthyphro is about to bring charges of murder against his father. The two men debate the natures of both piety and justice, their conversation ending when Socrates proves to Euthyphro that his (Euthyphro's) actions are not what he believes them to be, and Euthyphro leaves in confusion.

The second dialogue, "Apology," starts out as a monologue, as Socrates makes his defense to the Athenian court. He begins by outlining his life story, describing how he became a philosopher through the influence of the gods, and how he sees himself as being on a quest for wisdom, rather than forcing it on others (which is a component of the crime he's charged with). He also engages Meletus, his chief accuser, in debate, attempting to prove to both Meletus and the court that the case against him has no merit. His efforts are in vain, however: the narrative describes how Socrates is found guilty of the charges against him and is sentenced to death, a consequence that Socrates accepts with humor and realism.

The third dialogue, "Crito," is the briefest of the four in this collection. It takes place in Socrates' prison cell, where he is visited by a wealthy friend and ally, Crito, who urges him to take advantage of the offers of support from him and other wealthy Athenians, and escape. Socrates gratefully and gently refuses, explaining that his sense of loyalty to the state and its judgment, which he believes to be inspired by the pure principle of justice, is too strong.

The fourth and final dialogue, "Phaedo," is the longest of the four, and is the only one in which Socrates is not physically present. The dialogue takes place a short time after his death, and consists of Phaedo, a student present at Socrates' death, telling the curious Echecrates about the end of Socrates' life. Phaedo describes how Socrates spent much of his last hours in debate with two curious philosophers, Simmias and Cebes, debating the nature of death, the nature of the soul, and what happens to the soul after death. Socrates states his belief that the individual soul returns to the physical world lifetime after lifetime, and that between the end of one lifetime and the beginning of the next, the soul can rest and/or be rehabilitated (if the departed lifetime was corrupt) in one of a number of spiritual "worlds." He also suggests that for anyone with a philosophical curiosity, death is nothing more than an opportunity to learn more about existence.

At the conclusion of these dialogues, an Attendant appears with instructions for Socrates on how he is to take the poison that is to end his life. Socrates willingly takes the poison, and Phaedo narrates the final moments of his death, concluding with the statement that Socrates was "the wisest and justest and best."

More summaries and resources for teaching or studying The Trial and Death of Socrates: Four Dialogues.

The Trial and Death of Socrates: Four Dialogues from BookRags. (c)2022 BookRags, Inc. All rights reserved.