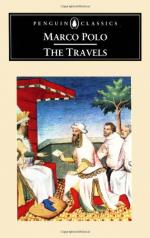 Marco Polo
This Study Guide consists of approximately 36 pages of chapter summaries, quotes, character analysis, themes, and more - everything you need to sharpen your knowledge of The Travels of Marco Polo.

The Travels of Marco Polo Summary & Study Guide includes comprehensive information and analysis to help you understand the book. This study guide contains the following sections:

This detailed literature summary also contains Topics for Discussion and a Free Quiz on The Travels of Marco Polo by Marco Polo.

"The Travels of Marco Polo" presents a broad and wide-ranging panorama of Kubilai Khan's thirteenth century empire. Marco Polo is the Great Khan's emissary who is commissioned to travel throughout his empire. Marco Polo is sent to investigate and report back his findings about people, customs, culture, climate, flora and fauna, game, birds and habitation. The Great Khan's empire ranges from the Mideast and the Levant east through all the lands and kingdom to the China Sea and islands in it, north to Russia and the polar region and south to the Indian Ocean islands. Marco Polo is believed to travel farther and more widely than anyone else in the world of his day.

Marco Polo is born into a family of Venetian merchants. He spends twenty years in the service of travel through the Great Khan's empire. He starts his first mission as a young lad of seventeen after arriving at the court with his father Niccolo and uncle Maffeo. The Great Khan is pleased with his first report of the business and remarkable things he sees. He honors him by proclaiming he is Messer Marco Polo. The narrator of these tales is Rustichello of Pisa who claims this book describes the "great wonders and curiosities" of many territories including Armenia, Persia, Tartars, India and other land that Marco Polo sees with his own eyes. Marco Polo is believed to be a wise, noble Venetian citizen who tells the truth in this written record for others to learn from it. Rustichello of Pisa records these tales in 1298 to occupy his time while they are prisoners of war in a Genoa prison.

Rustichello's experience as a romance writer makes "Travels" a best-seller of its day according to Ronald Latham who writes the Introduction and translates this version of Marco Polo's tales. Latham bases the "Travels" on Professor Benedetto's work, which is a "straightforward and readable version" for the common man to enjoy. "The Travels of Marco Polo" is a 380-page non-fiction tale of travel and exploration through thirteenth century territories of the Great Kubilai Khan of the Mongol Empire. Marco Polo travels on assignment from the Great Khan between 1271 and 1292.

The book has nine numbered chapters plus an Introduction, Prologue, Epilogue and back matter. A Genealogical Table of the Imperial Mongol House and Maps with inset pages of Marco Polo's travels provides illustrations to guide the armchair traveler. The Index offers quick access to unfamiliar names, subjects and locations discussed in the book. Chapter titles are named for a travel route or region with the exception of a chapter about the lifestyle and fortunes of the Great Kubilai Khan. "The Travels of Marco Polo" is a colorful, fast-paced and fascinating book about the tales and travels of Marco Polo on his exploration of the Great Khan's thirteenth century lifestyle, times and empire.

The Travels of Marco Polo from BookRags. (c)2022 BookRags, Inc. All rights reserved.