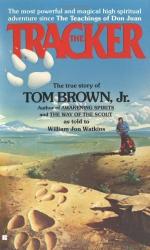 Tom Brown (naturalist)
This Study Guide consists of approximately 37 pages of chapter summaries, quotes, character analysis, themes, and more - everything you need to sharpen your knowledge of The Tracker.

The Ultimate Track and Go and Ask the Mice Summary

Tracking is compared to following a string. The first clue is at one end, and at the other end a creature leaves clues. Following the "mystery" along the string is what draws the tracker along. Brown has been interested in such mysteries since childhood; he never goes in a straight line, but follows the lure of tracks. Brown has been an observer since he was eight, but he begins to study tracking seriously when he meets Stalking Wolf, the grandfather of Brown's best friend Rick.

Stalking Wolf teaches Brown and Rick incrementally, and in doing so, teaches them how to learn, rather than just giving them information. Stalking Wolf feels that Brown has a gift for stalking, but it will take him twenty years...

More summaries and resources for teaching or studying The Tracker.

The Tracker from BookRags. (c)2022 BookRags, Inc. All rights reserved.