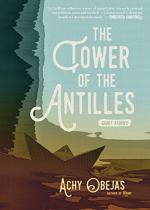 The Tower of the Antilles Summary & Study Guide

Achy Obejas
This Study Guide consists of approximately 54 pages of chapter summaries, quotes, character analysis, themes, and more - everything you need to sharpen your knowledge of The Tower of the Antilles.

The Tower of the Antilles Summary & Study Guide Description

The Tower of the Antilles Summary & Study Guide includes comprehensive information and analysis to help you understand the book. This study guide contains the following sections:

This detailed literature summary also contains Quotes and a Free Quiz on The Tower of the Antilles by Achy Obejas.

The following version of this book was used to create this study guide: Obejas, Achy. The Tower of the Antilles: Short Stories. Akashic Books, 2017. First Edition.

The Tower of the Antilles is a collection of 10 short stories. The first story is "The Collector," which opens with a question: "What is your name?" (13). The story alternates between a man who moves to Florida from Cuba, and the descriptions of the original inhabitants of Cuba. The man in Florida begins collecting boats he finds washed up on the beach, and dreams of building a tower to display them and share their stories, but abandons his plans when his neighbors do not support him. The native Cubans meet Columbus and his crew, but are unable to recognize that their large caravels are boats.

In the second story, "Kimberle," the narrator lets her suicidal friend Kimberle move into her apartment with her while a serial killer is on the loose. The two women form a complicated relationship involving theft, suspicion, and sex, and as the narrator begins to realize she is in love with Kimberle, she is confronted with the possibility that Kimberle is the serial killer.

The third story, "Exile," is a short piece describing a family's experience moving from Cuba to the United States. It provides brief snapshots of what their new life features, and how they navigate their identities as both Cubans and Americans. In the fourth story, "The Sound Catalog," a series of sounds is linked to certain memories from Dulce's life. Each sound leads to her recollection, and creates a story of her relationship with her Cuban ex-lover, their move to Chicago, and the accompanying adjustment. The two women break up as Dulce begins working to open her own beauty salon, and her Cuban ex-lover moves back to Cuba to work in government. Dulce realizes that she has hearing impairment, and the story offers a glimpse into the experiences of someone whose ability to communicate is hindered by her difficulty hearing.

In "North/South" the story is made up of five fragments, and describes a Cuban family who moved to a snowy, northern place. They return to the island the father is from each year. The story also describes two children working at a grocery store. The father, mother, and daughter, Mari, celebrate Mari's birthday on the island. In another fragment, a grownup Mari meets the girl -- now a woman -- who worked at the grocery store, who she learns is her half-sister. Her half-brother had died years earlier.

In the sixth story, "The Cola of Oblivion," a woman whose parents brought her to the U.S. from Cuba goes back to the island to visit. She is having dinner with her cousin, her cousin's husband, and their daughter. They tell the visitor about how they helped expel a woman as a counterrevolutionary, but insist that they only did it because they felt pressured to. They then ask the visitor to help them with a convoluted plan to bring them to the United States with her, saying that she owes them because her mother had never sent them any gifts from the U.S.

In "Waters," a Cuban woman who moved to New York returns to Cuba for a visit. She stays with her friend Isabel, and meets a Cuban poet who claims that she cannot be a true Cuban poet because she often writes in English. Throughout her trip she struggles to assert her Cuban identity, and alternates between feeling at home and feeling like a foreigner in the land of her birth.

In "Superman," the narrator recounts the rumors surrounding a famous sex-show performer in Havana who disappeared during Castro's Revolution.

In the ninth story, "The Maldives," a woman moves from Havana to Florida, and becomes fascinated with the Maldives. When she is diagnosed with a brain tumor that will eventually take her vision and hearing, so she moves to the Maldives, where she plans to drown herself when her senses go.

The final story, "The Tower of the Antilles," mirrors the first. It also opens with the question, "What is your name?," and features a tower of boats that appear on an early Cuban shore (153). A woman is being interrogated by a man, and imagines boats she could build to escape. The narrative alternates to scenes featuring the original inhabitants of Cuba, who eventually notice the tower of boats that has appeared on their shore.

More summaries and resources for teaching or studying The Tower of the Antilles.

The Tower of the Antilles from BookRags. (c)2022 BookRags, Inc. All rights reserved.