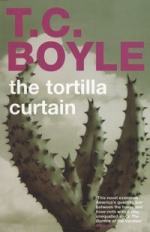 T. Coraghessan Boyle
This Study Guide consists of approximately 43 pages of chapter summaries, quotes, character analysis, themes, and more - everything you need to sharpen your knowledge of The Tortilla Curtain.

Delaney drives an Acura with a vanity license plate that says "PILGRIM." The Acura's right headlight gets damaged when Delaney hits Candidó with his car.

When Candidó is struck by Delaney's car, he carries a small brown bag that contains a package of tortillas. The package is labelled "Como Hechas a Mano."

Candidó's father catches a wild opossum for dinner when Candidó is a child. Candidó thinks that it tastes like a wet rat.

Candidó's mother dies when he is six years old, and he feels that he has killed her by not saying his prayers. His mother's coffin is sealed in glass, because the body smells. Young Candidó thinks that the corpse opens her eyes and told him to go to the devil.

More summaries and resources for teaching or studying The Tortilla Curtain.