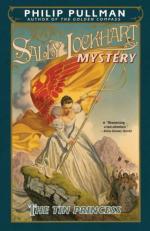 Philip Pullman
This Study Guide consists of approximately 27 pages of chapter summaries, quotes, character analysis, themes, and more - everything you need to sharpen your knowledge of The Tin Princess.

This detailed literature summary also contains Topics for Discussion and a Free Quiz on The Tin Princess by Philip Pullman.

Tin Princess by Philip Pullman is the story of Becky Winter who accepts a position as a tutor to Adelaide Bevan and begins an adventure that no one could ever imagine. Rebecca Winter is sixteen in 1882 and is walking through the St. John's Woods area of London. She is on her way to meet her first pupil. Rebecca speaks German, Italian, English, French, and Spanish and is learning Russian. Her family had been forced into exile from central Europe when she was three years of age and she now lives with her mother and grandmother in Maida Vale. Becky wanted to attend the university. She also wanted romance.

There is a bomb blast outside the house in St. John's Woods that changes everything. Becky goes with the detective, Jim Taylor and learns there is quite a lot of mystery surrounding the woman, Adelaide Bevan. She disappeared ten years ago after the death of the father of Sally Goldberg. Spotted by Jim, he followed her to the house in St. John's Woods and was there when the bomb blast occurred.

Miss Bevan is actually married to the Herr Strauss who is actually Prince Rudolf of Razkavia, a small kingdom, located between the two Great Powers, Germany and Austria-Hungary. Becky is a Razkavian citizen, living in exile with her mother and grandmother. When Razkavian Crown Prince Wilhelm and his princess are assassinated, Prince Rudolf and his bride must return to Razkavia. They hire detective Jim Taylor and tutor-translator Becky Winter to accompany them.

Jim is trying to find out who is behind the murders of the royal family and trying to protect Rudolf and Adelaide. When they arrive in Razkavia, the old King dies and Rudolf becomes king. He is assassinated immediately after his coronation. As he is dying, he passes the flag to his bride, who completes the walk to the rock with the flag. She is crowned Queen.

The novel is set in the middle of international intrigue. Razkavia is coveted by both of the Great Powers for its nickel deposits. The new queen negotiates a tripartite treaty while Jim tries to investigate the murders. He learns there was an older Crown Prince who married a Spanish actress. He was supposedly killed in a mysterious hunting accident but was actually held prisoner in an asylum until he became deranged. Jim. Adelaide and Becky became captives in a plot orchestrated by a German banker.

The reader will find this book very exciting and difficult to put down. It is quick and easy reading that will be enjoyed by readers of mystery.

More summaries and resources for teaching or studying The Tin Princess.