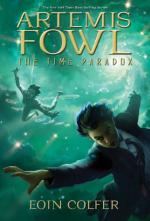 Eoin Colfer
This Study Guide consists of approximately 22 pages of chapter summaries, quotes, character analysis, themes, and more - everything you need to sharpen your knowledge of The Time Paradox.

The Time Paradox by Eoin Colfer is the sixth book in the Artemis Fowl series. In this book, Artemis has recently returned from Limbo and still growing used to his new twin siblings, Beckett and Miles, when he learns that his mother is dying of some mysterious illness. Artemis immediately calls for help from his fairy friends only to discover that his mother's illness is a fairy illness believed to have been eradicated. The only cure is the brain fluid of a special lemur that is now extinct. Artemis must travel back in time to save the lemur and bring it to his mother in time to save her life. The Time Paradox is an exciting new adventure for Artemis fans and new readers alike that will leave all grappling with the complexities of time travel.

Artemis is in the study with his two-year-old twin brothers when his father comes and tells him that his mother appears to be dying. Artemis immediately rushes to his mother's side to attempt to heal her with the remaining amounts of magic that he stole from the fairies. However, his mother's body resists the magic and appears to grow worse. As Artemis' father and Butler make plans to get Angeline help, Artemis reaches out to Captain Holly Short of the LEP, a fairy who may have access to other types of magic that can help his mother.

When Holly arrives, she realizes that Angeline Fowl suffers from a fairy illness associated with polluted magic that once devastated the fairy population. The only cure is the brain fluid of a silky sifaka lemur of Madagascar. However, this lemur is extinct, thanks to a fire in Madagascar and Artemis' own actions when he sold the last remaining lemur to a group called the Extinctionists. Hence, Artemis realizes he must travel back in time in order to save his mother. Artemis lies to Holly, telling her it is her fault that his mother is ill, causing her to agree to his crazy plan.

Artemis and Holly use the magic of a demon friend, N°1, to travel back in time eight years. When they arrive, Artemis believes it will be simple to take the lemur, all they have to do is wait for Butler to place the lemur in Artemis' study. However, events do not unfold as Artemis recalls them. For this reason, Artemis and Holly are caught by butler and captured, placed in the trunk of the Fowl family Bentley. Fortunately, the dwarf Mulch Diggums, comes and breaks them out of their prison. It turns out that Mulch found a letter from Artemis promising him a great amount of gold if he came at that moment to rescue them.

Older Artemis manages to escape Opal, but as he travels forward in time, he begins to realize that there are some oddities about his mother's illness. Artemis sets in action a plan to prove his theories, coming to realize that his mother is not really sick, but that Opal has taken control of her body and is using her to get the lemur. Artemis manages to outsmart Opal, causing her to chase him to a small island near his home where he traps her underground.

More summaries and resources for teaching or studying Artemis Fowl: The Time Paradox.