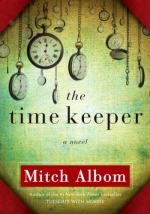 Mitch Albom
This Study Guide consists of approximately 23 pages of chapter summaries, quotes, character analysis, themes, and more - everything you need to sharpen your knowledge of The Time Keeper.

This detailed literature summary also contains Topics for Discussion on The Time Keeper by Mitch Albom.

The Time Keeper is a novel by writer Mitch Albom. In this novel, Dor is obsessed with time. Dor's obsession takes up so much of his time that he misses out on some of the most important things in life. As Dor's wife lies dying, he turns to God to ask for more time. Instead, Dor is locked in a cave and forced to listen to man's obsession with time, an obsession begun by him. To return to his own life and time, Dor is then given the task of forcing an elderly man and a young girl to appreciate the time they have been given. The Time Keeper is a heartwarming novel that reminds readers to value every moment of every day.

Dor is a young man living in a time before the written word, before math, before calendars and clocks. However, Dor has found ways to measure time and he spends a great deal of his time pursuing this interest. Even as he marries and has three children, Dor continues to be obsessed with his time keeping inventions. One day, a childhood friend who has become a rich king, comes to Dor and tells him of his plan to build a tower to reach the heavens. This man wants to destroy the gods and become the ultimate ruler. This man wants Dor to help him with his odd inventions. Dor refuses. The man tells Dor he should leave the city because he will make him help if he does not.

Dor and his wife leave their children with Dor's parents and move away, creating a home in the middle of nowhere hours from the city. A visit from another exiled couple who are clearly suffering some strange disease causes Dor's wife to become ill. As she lies dying, Dor struggles with the loss and begins to wish he had more time. To gain more time, Dor runs back to the city and climbs the tower his childhood friend has made to demand time from God. Instead, Dor finds himself trapped in a cave where he is destined to listen to pleas from the people on earth as time becomes more and more of an obsession among modern man.

In New York, in modern times, there is a wealthy man named Victor Delamonte, who is dying of cancer and kidney failure. Victor does not want to die. In fact, he wants to live forever. For this reason, Victor arranges behind his wife's back to have his body frozen before death in hopes that he will be revived in some future time and cured.

In a suburb of New York lives Sarah Lemon, an awkward young girl who has suffered greatly in the aftermath of her parents' divorce. Sarah is very smart, but she has no friends. When a boy begins paying attention to Sarah, she believes he is in love. However, the boy turns out to be using Sarah for his own pleasures. Sarah is so devastated by this boy's cruel treatment of her that she decides to commit suicide.

Dor is sent back to earth and told that he can finish his story by helping two people understand the things he himself failed to understand. Dor is given the power to control time. Dor uses this power to learn all he can about the world in a short period of time. Dor then goes to New York where he meets both Victor and Sarah. On New Year's Eve when both Victor and Sarah have chosen to end their lives, Dor stops time and introduces them to one another in hopes that this meeting will help them.

Dor then takes both Sarah and Victor on a tour of their pasts and the future. Sarah and Victor come to the realization that their choices will only hurt those they love the most. For this reason, when time begins again, they both make the decision to continue living. They meet in the emergency room and Victor gives Sarah the money she needs to go to an Ivy League school to give her the education she will use to one day cure the same cancer from which he suffers. At the same time, Dor returns to his own time where he is able to hold his wife as she lies dying.

More summaries and resources for teaching or studying The Time Keeper.