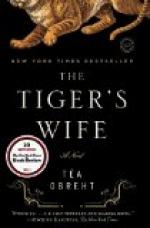 This detailed literature summary also contains Topics for Discussion and a Free Quiz on The Tiger's Wife by Téa Obreht.

The multi-textured narrative of this complex novel interweaves three related plots. A young doctor investigates the circumstances of her grandfather's mysterious death, recounts what she discovered while researching his childhood in a small town, and passes on stories he himself told her about his encounters, when an adult, with a mysterious "Deathless Man." Throughout all three narrative lines, the work explores the nature of death, death's relationship to the struggle to live, and the relationship between truth, secrets and lies.

In a brief prologue, the narrator (Natalia, a doctor in her early thirties) narrates her earliest memory - of accompanying her grandfather on one of several shared visits to the tiger's cage at the zoo. During that visit, she witnessed a tiger attacking an attendant, and in narration comments on her belief that her grandfather made sure she watched it.

The novel proper begins with a description of the immediate aftermath of Natalia's grandfather's mysterious death in a town he had no real business being in, and of her grandmother's concern about her inability to observe the proper rituals, given that Natalia's grandfather's personal effects have gone missing. During narration, Natalia reveals that she knew her grandfather had cancer, but nobody else in her family did. Meanwhile, Natalia and her friend Zora, a fellow doctor, travel to an abandoned monastery now home to children orphaned during the decade-long civil war in this Eastern European region. They arrive at their destination, are welcomed by the parents of the monk who heads the orphanage, and become aware that there are other guests on the land as well - a group of diggers who, the narrative eventually reveals, are searching for a body abandoned in a nearby vineyard in the early days of the war.

As Natalia and Zora start their treatment of the orphans, and as Natalia draws closer to learning the truth of her grandfather's death, the narrative moves back and forth between the present and two different timelines in the past. In the first, Natalia describes the relationship between her younger self and her grandfather which, over the course of several years and in spite of several conflicts, was very close. She pays particular attention to retelling her grandfather's stories about a mysterious "Deathless Man" whom, according to her grandfather, he encountered several times under strange circumstances and who, at one point, suggested he might be the nephew of Death. In the second narrative line, Natalia recounts stories about her grandfather's childhood - specifically, about the small mountain town (Galina) in which he grew up, about the tiger who came to live in the mountains, and about the much whispered-of relationship between the tiger and the unnamed wife of abusive butcher Luka.

Eventually, Natalia discovers the truth about where her grandfather died - in a small nearby town. At the same time, the diggers discover the body they had been searching for, and engage in a ritual designed to release his soul to eternity into the company of a "mora", who collects both the departing soul and gifts left for it by its loved ones. Natalia volunteers to be the non-family member whose involvement is necessary for completion of the ritual. She has come to believe that her grandfather's soul was taken by the Deathless Man, that the Deathless Man collects souls such as that recently released in the digger's ritual, and that if she participates in the ritual she will meet the Deathless Man and learn more about her grandfather's final moments. She does what the ritual demands, and eventually discovers that the local "mora" is a man, unnamed in the narrative, who has recently lost his son.

The narrator concludes with an epilogue describing how, even in death, Natalia's grandfather is spoken of with admiration, and how the spirit of the village tiger remains long after it too has died.