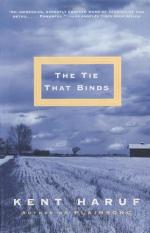 The Tie That Binds: A Novel Summary & Study Guide

Kent Haruf
This Study Guide consists of approximately 29 pages of chapter summaries, quotes, character analysis, themes, and more - everything you need to sharpen your knowledge of The Tie That Binds.

The Tie That Binds: A Novel Summary & Study Guide Description

The Tie That Binds: A Novel Summary & Study Guide includes comprehensive information and analysis to help you understand the book. This study guide contains the following sections:

This detailed literature summary also contains Topics for Discussion and a Free Quiz on The Tie That Binds: A Novel by Kent Haruf.

As the story opens, Sanderson Roscoe is inside a corral working with cattle when a man who is dressed in yellow pants arrives. Sandy notes that the man can't figure out how to open the gate and climbs over, though his weight is not good for the gate. The man then tells Sandy that he's from the Denver Post and he's come to ask some questions about Edith Goodnough. Sandy notes that the reporter knows about the barking dog and the chicken feed and that he, Sandy, had tried to keep the firefighters from entering the Goodnough home on the night it burned. He then says that there was much more of the story they didn't get right, and that he wasn't about to tell them anything. He was willing, however, to tell the story as one friend to another over a cup of coffee. The story, Sandy says, goes something like this.

Ada and Roy Goodnough arrive in Colorado as homesteaders and take up a section near the one being farmed by an old woman and her six-year-old son, John Roscoe - Sandy's father. Roy is downright mean and strict and it's John's mother, Hannah Roscoe, who helps Ada deliver two children, a daughter named Edith and a son named Lyman. Life for the family is hard with Roy refusing to spend money on anything that isn't absolutely necessary. Ada dies when Edith is just seventeen and Roy informs her that she's now to take on her mother's duties. One year, John is helping with harvest when Roy gets wire tangled in the equipment and his yelling spooks the horses so that they jerk ahead, catching Roy in the machinery and grinding both hands to nubs. With one finger intact, he is able to button his shirts but is mostly dependent on Lyman and Edith and that dependency weighs on the two. Then John asks Edith to marry him. She realizes she can't leave her father but Roy, fearing that she might, rigs an axe over a rafter and chops off his remaining finger.

John eventually marries a widow named Leona and they have a son, Sanderson, who spends lots of time with Edith. Then Pearl Harbor happens and Lyman, with plans to join the military, leaves home. At forty-one he isn't accepted into the service but spends the next twenty years roaming the country, regularly sending Edith postcards and cash on Christmas. Roy dies and Edith goes on living in the farm house, now alone, with only Lyman's occasional postcards.

Sandy marries a young woman named Mavis and Lyman returns. The four - Sandy, Mavis, Lyman and Edith - often play cards or go dancing together. They are returning from the county fair when Lyman runs into a bridge and the unborn son of Mavis and Sandy is killed in the wreck. Lyman never drives again and begins to be childish. Mavis and Sandy's next child, a daughter named Rena, seems to be able to reach him but then Sandy learns that Lyman has become violent on occasion. Edith says she can't see any options available other than to go on caring for Lyman.

One night Mavis sees flames coming from the Goodnough farm and Sandy rushes there, instructing Mavis to call the fire department. He finds the doors locked - an unusual occurrence - then sees Edith in a chair in the house, and she holds up her hand to him. He understands that this is her choice, but the fire department arrives quickly. Sandy tries to keep them from entering the house but they rescue Edith. Lyman dies of smoke inhalation.

Over time, it's discovered that Edith had tied their old dog in the shed with food and water within reach though the animal is typically allowed inside. She'd also put a fifty-pound bag of feed out for the chickens. With those signs of planning, it seemed obvious that Edith had set the fire on purpose and a Denver Post reporter begins poking into the story. Sandy notes that after that, the local sheriff posts a guard at the door to Edith's hospital room, and he seems to be waiting for the old woman - who is more than eighty years old - to recover so that she can be arrested for the murder of her brother.

More summaries and resources for teaching or studying The Tie That Binds: A Novel.

The Tie That Binds: A Novel from BookRags. (c)2022 BookRags, Inc. All rights reserved.