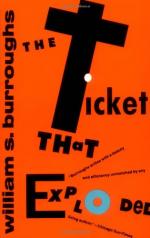 Plot Summary
+Chapters Summary and Analysis
see the action, B.J. and winds of time
in a strange bed and do you love me
operation rewrite and the nova police
writing machine and substitue flesh
the black fruit and all members are worst a century
combat troops in the area and vaudeville voices
terminal street and last round over
call the old doctor twice and shuffle cut
in that game? and showed you your air
let them see us and silence to say goodbye
the invisible generation
Characters
Objects/Places
Themes
Style
Quotes
Topics for Discussion
Order our The Ticket That Exploded Study Guide

William S. Burroughs
This Study Guide consists of approximately 24 pages of chapter summaries, quotes, character analysis, themes, and more - everything you need to sharpen your knowledge of The Ticket That Exploded.

The Ticket That Exploded Summary & Study Guide includes comprehensive information and analysis to help you understand the book. This study guide contains the following sections:

This detailed literature summary also contains Topics for Discussion on The Ticket That Exploded by William S. Burroughs.

"The Ticket That Exploded" is a science fiction novel written by legendary author and poet William S. Burroughs. It serves as the end of the author's Nova trilogy, which explores the methods of control imposed on the human psyche at all levels. These controls are externalized into alien and fantastic forces that reach humankind and corrupt their behavior through addictions. These addictions are effectively viruses that can continue to degrade and fracture humanity by further heightening conflicts between mutually exclusive groups. To counter these ill-effects, the Nova Police are summoned. Led by Inspector Lee, the department responsible for rewiring human behavior must confront and arrest the Nova Mob, the group of viruses and degeneration causing the problems in the first place. The Nova Police do this by splicing tape recordings, video material, and photography together and modifying the appearances and behaviors of the Nova Mob, then playing it back and continually repeating the process until at last the Mob is undone and humanity is free to thrive once more. The cut-up method employed by the Nova Police also turns out to be the very same method employed by the author to create the text. While this apparently disrupts the natural narrative flow of the story and creates long passages of slight alterations of repeated themes, the technique nonetheless points to a far more abstract series of events, as the words, phrases, sentences and paragraphs all behave under a very different set of rules from the standard novel.

"The Ticket That Exploded" rushes back and forth through space, time, points of view, and myraid conflicts, riding the same set of tightly related themes to the very end. Not intended to be read as a standard book by any means, this novel is one of the most original modern attempts at criticizng society and advocating social change, and remains unique decades after its publication for its experimental technique. The Nova Mob is undone in nearly every chapter as the rewrite method continues to change the passages in small means and ways. Pieces of former works were also included in "The Ticket the Exploded," adding a further layer of complexity to the order laid forth by the cut-up method. The inherent idea in this work is that old patterns must be broken in exactly this fashion if humanity is to keep itself from total destruction, and as such, the book remains true to its own method. This is a book to be explored rather than enjoyed; considered, rather than understood; and appreciated for the subliminal qualities that it brings to light by the technique it employs.

More summaries and resources for teaching or studying The Ticket That Exploded.

The Ticket That Exploded from BookRags. (c)2022 BookRags, Inc. All rights reserved.