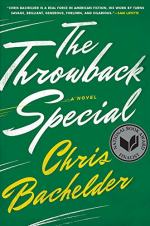 Chris Bachelder
This Study Guide consists of approximately 35 pages of chapter summaries, quotes, character analysis, themes, and more - everything you need to sharpen your knowledge of The Throwback Special.

This detailed literature summary also contains Quotes and a Free Quiz on The Throwback Special by Chris Bachelder.

Throwback Special tells the story of a group of men who reunite once a year to reenact a football play called the Throwback Special. In 1985, Joe Theismann’s career was ended after this play that went wrong. He fractured his leg and had to end his football career. For 16 years, these men have met to do the reenactment.

As they begin to arrive at the hotel, the desk clerk prevents them from checking in. Robert, the first to arrive, is tasked with mending a chinstrap while he waits in the lobby. The men discuss their lives and insecurities. A lottery is held to determine who will portray each player. The commission is assigned after the previous year’s competition. This year, Trent is the commissioner and Gary is selected as Taylor, but not before Derek, the only person of color in the group, contemplates how he would approach the player seen as a villain differently from the others.

The other players choose who they will play until the last name, which reveals who will play Joe Theismann. Fat Michael, a pinnacle of male physique, is selected, which leads him to isolate himself from the group as he contemplates what it means to be in great physical form and face a life-altering injury. The men discuss their families and divorces. They grapple with toddlers learning to walk to teenagers exploring their sexuality. Andy, who once struggled to call his girlfriend his wife, now has difficulty calling her his ex-wife. The men try to relate to one another, but most of them have little in common with each other outside of participating in the reenactment.

The day of the reenactment arrives and the men come together to eat breakfast and watch the original play repeatedly. Watching Theismann’s leg break over and over again leaves some of the men queasy. Some even believe that this will be the final year of the reenactment. Things are different this year. The group is forced out of the conference room where employees from Prestige Vista Solutions are having a corporate gathering. The men are older and questioning elements of their lives, from marriage to parenting to fitness.

When it is finally time to do the reenactment, the employees from Prestige Vista Solutions go to the football field to watch. The players take their places and the play begins, but something changes and they do not follow through on the play. The Prestige Vista Solutions employees are confused, but one man cheers from the sideline. The men return to the hotel room to celebrate. Their celebration includes David, one of the young employees from Prestige Vista Solutions. He slips out of the hotel room unnoticed and thinks about the reenactment. In his excitement he contemplates starting up a new tradition with all new people. The one thing David knows he needs to keep is the lottery system to ensure that everyone gets a chance to play as Theismann.

More summaries and resources for teaching or studying The Throwback Special.