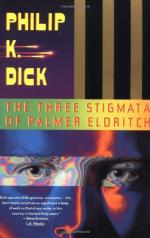 This Study Guide consists of approximately 35 pages of chapter summaries, quotes, character analysis, themes, and more - everything you need to sharpen your knowledge of The Three Stigmata of Palmer Eldritch.

This detailed literature summary also contains Quotes and a Free Quiz on The Three Stigmata of Palmer Eldritch by .

The following version of this book was used to create this study guide: Dick, Philip K. The Three Stigmata of Palmer Eldritch. New York: Mariner Books, 2011.

The novel is set at an unknown point in the future. The story opens in New York City. Barney Mayerson is a man with innate precognitive abilities, which he employs in his job as a consultant at a company called P.P. Layouts. Barney’s new assistant is a woman named Roni Fugate, and she seems to be intent on stealing Barney’s job from him. Barney’s employer, Leo Bulero, makes much of his revenue by illegally manufacturing and selling a hallucinatory drug called Can-D. P.P. Layouts creates miniature environments onto which Can-D users can project their minds. Leo becomes nervous when business rival palmer Eldritch returns to the solar system after leaving ten years ago to explore the Proxima System.

Leo soon learns that Eldritch has apparently created a legal alternative to Can-D, called Chew-Z, and will soon begin manufacturing and selling it. Chew-Z is apparently made with an organic material that Eldritch found in the Proxima System. Leo decides to go to Eldritch’s residence on the moon and kill Eldritch. However, on the moon, Eldritch forcibly injects Leo with Chew-Z. Eldritch claims that Chew-Z actually allows a person to project themselves into alternate dimensions that they may create and control. While under the influence of Chew-Z, Leo has a vision of a possible future. In this future, Leo is venerated for killing Eldritch, who apparently was deemed a threat to humanity. Leo returns to reality and leaves the moon, now doubly determined to kill Eldritch, who is apparently somehow a serious threat to the wellbeing of humanity.

Despite realizing that Leo was likely in trouble, Barney did not go to the moon to attempt to rescue Leo. Leo realizes this, so when he arrives back on Earth, he promptly fires Barney. Barney feels morally ashamed of his cowardice and selfishness. Because Barney has received a notice that he may be drafted into an off-world colony, Barney decides to immediately volunteer to go; he sees this as a type of penance. Leo devises a way of hurting Chew-Z sales by having Barney ingest Chew-Z in the colony and then ingest a seizure-inducing toxin to make it look like Chew-Z is dangerous. Barney agrees to help Leo in this plan. On the rocket ship ride to the mars colony, Barney meets Anne Hawthorne, a devoutly Christian woman who will also be joining the colony.

Barney soon finds that life in the colony is generally desolate and boring. The colonists mostly seem to rely on Can-D for entertainment. Soon, an agent sent by Leo arrives to give Barney the toxin to take after ingesting Chew-Z. Soon after, to Barney’s surprise, Palmer Eldritch himself arrives in the colony to distribute Chew-Z. Barney ingests the Chew-Z and soon sees that Chew-Z projects a person into an alternate dimension that is ultimately controlled by Palmer Eldritch. In the Chew-Z domain, Barney communicates directly with Eldritch and learns that Eldritch’s essence is directly connected to Chew-Z. Eldritch is therefore able to proliferate his presence and power by infecting people who ingest Chew-Z. Barney realizes that Eldritch may have been replaced by an alien life form in the Proxima System, or else Eldritch simply gained these powers by merging his essence with the Chew-Z substance.

Barney awakes from the Chew-Z domain to see that Leo has arrived on Mars to provide Barney with assistance. Due to Barney’s Chew-Z visions, he feels confident that Leo will be able to defeat palmer Eldritch. Barney, who has formed a loving relationship with Anne Hawthorne, decides to remain in the Mars colony. As Leo returns to Earth, the narrative implies that Leo may actually never have returned to reality after being injected with Chew-Z. However, it is also possible that he did return and that Eldritch’s power has begun to proliferate along with Chew-Z. The novel ends before revealing if Leo is eventually able to defeat Eldritch.

More summaries and resources for teaching or studying The Three Stigmata of Palmer Eldritch.