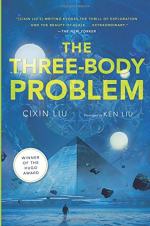 Cixin Liu
This Study Guide consists of approximately 48 pages of chapter summaries, quotes, character analysis, themes, and more - everything you need to sharpen your knowledge of The Three-Body Problem.

This detailed literature summary also contains Quotes and a Free Quiz on The Three-Body Problem by Cixin Liu .

NOTE: This study guide refers to the 2014 Tor Paperback edition and translation by Ken Liu of "The Three-Body Problem" by Cixin Liu.

“The Three-Body Problem” is a science fiction novel by Cixin Liu (and translated by Ken Liu) which traces the efforts of disillusioned Chinese scientists who implore alien life to come to Earth to forcibly redeem humanity. When the novel begins in the 1960s, China is in the midst of its Cultural Revolution in which various factions in the Communist Party – especially among younger members – accuse one another of not being radical enough. Countless die, including Ye Wenjie’s father, a professor, who is beaten to death by four teenage girls with belts. Ye Wenjie, an academic in the field of astrophysics herself, is forcibly conscripted into a unit of Chinese civilians responsible for deforestation near Radar Peak, which breaks her heart. She meets a reporter named Bai Mulin, who like Ye Wenjie, has a soft spot for the environment –something the Communists consider weak and Western. Wenjie helps Bai to write a letter urging the Party to reconsider its stance on the environment, but this lands her in serious trouble.

Ye Wenjie is given a choice. Based on her stellar academic credentials, she can join the operations of Red Coast Base on Radar Peak, or she can face severe punishment. Ye Wenjie chooses Red Coast Base, and there helps to monitor for signals from extra-terrestrial, or alien life. As the years pass, Ye Wenjie marries the base commander and settles into a comfortable routine of work, sending out messages about Earth to any life that may receive them. Finally, a message returns from the Trisolaran civilization on the planet Trisolaris. The message is a warning not to respond, or Earth’s coordinates will be identified. Ye Wenjie, believing the humans of Earth need a moral awakening by an outside force, responds. The Trisolarans, who have endured unpredictable lives due to the erratic rotation of three suns, decide to conquer Earth. It will take them 450 years to reach Earth, and they know that by their arrival, human beings will have superior technology, so they hatch a new plan.

Decades pass. Working with Ye Wenjie’s growing group of supporters who cheer the idea of alien invasion, the Trisolarans begin to undermine human faith in science and technology so that they will begin to lose their sense of progress and purpose, while at the same time sending two alien protons to Earth to disrupt scientific results. As this occurs, numerous scientists begin to commit suicide or are found dead, with all of them declaring they have lost faith in science. Wang Miao, a nanomaterials researcher, is contacted by a secret international network of political, military, and scientific members called the Battle Command Center, who are seeking to solve the mystery surrounding the scientific community. Wang befriends the gruff military veteran-turned-police detective, Shi Qiang, and the two undertake further investigation. At the same time, Wang discovers an online game called “Three Body” in which the physical environment of Trisolaris is presented for players to attempt to solve regarding the three suns. The game ends with the player being told that the planet is hopeless, and a new home must be sought.

As Wang plays, he is invited to join a group of players, which he discovers to be Ye Wenjie’s group. It is then that he learns there are factions within the group, including those who want the Trisolaran aliens to forcibly redeem and improve humanity, and those who want the Trisolarans to exterminate humanity. It is also learned that those who wish for extermination have been withholding critical Trisolaran messages from the others. The meeting is broken up by Shi and a unit of soldiers and policemen. Using nanotechnology in the form of razor-sharp wires to slice apart the group’s traveling radar system ship, Wang and Battle Command learn the truth about the Trisolarans, and reveal this to Ye Wenjie. Wenjie is less stunned than annoyed. The Trisolarans then send a message to all humankind to announce their existence and intentions, calling humankind “bugs.” This causes Wang to fall into despair, but Shi reminds Wang that, despite superior technology, humans have not been able to conquer bugs. Ye Wenjie is later given access to the old Red Coast Base ruins, where she presumably commits suicide reflecting on the sunset of humanity.

More summaries and resources for teaching or studying The Three-Body Problem.