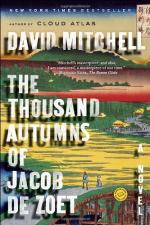 David Mitchell (author)
This Study Guide consists of approximately 23 pages of chapter summaries, quotes, character analysis, themes, and more - everything you need to sharpen your knowledge of The Thousand Autumns of Jacob de Zoet.

The Thousand Autumns of Jacob de Zoet: A Novel Summary & Study Guide includes comprehensive information and analysis to help you understand the book. This study guide contains the following sections:

This detailed literature summary also contains Topics for Discussion on The Thousand Autumns of Jacob de Zoet: A Novel by David Mitchell (author).

"The Thousand Autumns of Jacob de Zoet" is a novel by David Mitchell which is an account of the life of Dutch clerk Jacob de Zoet on the man-made island of Dejima in Japan between 1799 and 1817.

Jacob de Zoet, seeking to advance himself and marry his beloved, Anna, travels to Japan with the Dutch East India Company to work at the trading town on a man-made island, Dejima, in Nagasaki Harbor. Jacob is a devoted Christian, and prays daily using his family Psalter. He is abhorred by the corruption of the island, the black market trade, and the ill-practices of the Europeans around him. Jacob nevertheless befriends a Dutch physician, Dr. Marinus, and earns the respect of the people who work for the trading company. Jacob falls in love with a beautiful Japanese girl named Orito Aibagawa, who is studying medicine under Dr. Marinus. But due to Japanese law, and owing to Orito's high social status, Jacob cannot pursue her. Nevertheless, it is clear she returns affections to Jacob.

Meanwhile, Orito is sold by her stepmother upon the death of her father to a warped and twisted mountaintop cult, which slaughters babies and imprisons and impregnates girls. A rescue attempt by Orito's Japanese friends fails. Jacob, meanwhile, receives intelligence about what has happened to Orito, but is powerless to do anything. When the Dutch East India Company goes bankrupt, the British attempt to buy and then bombard Dejima, attempts which Jacob - now the senior officer at the company - is able to block. He gains respect with the local Japanese magistrate, who passes along the intelligence about the mountaintop cult, and commits ritual suicide with the cult's leader in order to make sure he dies. Jacob marries and has a son with a local Japanese woman, but she dies. Jacob's son is required by Japanese law when he leaves Dejima. Jacob later sees Orito, and they part ways. Back home, Jacob remarries and has a new family, and passes on his Christian faith and his Psalter to his Dutch son.

More summaries and resources for teaching or studying The Thousand Autumns of Jacob de Zoet: A Novel.