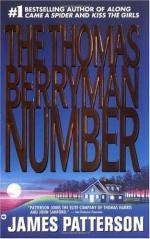 James Patterson
This Study Guide consists of approximately 24 pages of chapter summaries, quotes, character analysis, themes, and more - everything you need to sharpen your knowledge of The Thomas Berryman Number.

This detailed literature summary also contains Topics for Discussion and a Free Quiz on The Thomas Berryman Number by James Patterson.

The Thomas Berryman Number is the first novel by acclaimed author James Patterson. This novel follows the investigation and research of a Nashville reporter into the murder of Jimmie Lee Horn, one of Nashville's first black mayors. Set in the early seventies, this murder is wrapped in racial tensions that prove to have little to do with the actual motive to murder. The reporter, Ochs Jones, meets with friends and family of an unknown assassin named Thomas Berryman and soon discovers that everything he thought he knew about Horn's murder is wrong. The Thomas Berryman Number is an award winning first novel that will surprise and inspire James Patterson fans and newcomers alike.

Ochs Jones is sent to Long Island to investigate claims by a mental patient that Bert Poole did not shoot Jimmie Lee Horn. Ochs, along with almost every person in America, has seen news footage of Poole killing Horn; therefore, Ochs believes he is on a fool's errand. However, the information this mental patient, Ben Toy, gives him leads Ochs to believe there might be something to Toy's story. Ochs calls his editor and gives him an outline of what he has heard thus far and is given permission to continue talking to Toy. Toy tells Ochs that a man named Berryman was hired by a southerner to kill Jimmie Lee Horn.

Ochs reviews Toy's patient file and makes a list of all the people Toy has mentioned or called since being in the hospital. Ochs then goes to New York where he takes a look around Berryman's apartment. Inside the study, Ochs finds photographs of the man who hired Berryman. Ochs sends these photos to his editor where he quickly learns the man is a lawyer in the employ of Johnboy Terrell, an ex-governor of Tennessee. Ochs is excited because he knows that Terrell is corrupt and this might finally prove it.

Ochs continues his investigation by speaking with Oona Quinn, Berryman's girlfriend. Ochs knows the young woman is not telling him all he needs to know, but he continues to speak to her hoping she will tell him something that will break the case once and for all. Ochs continues to investigate, learning slowly the exact events of the fateful afternoon Horn was killed. It turns out that Berryman went to see Terrell in person, causing Terrell to become worried about his own safety. Terrell then hires another man to kill Berryman in order to hide Terrell's connection to the Horn murder.

This other killer comes to Nashville shortly after Berryman. While Berryman follows Horn around and checks out his schedule for the Fourth of July, making a plan for the murder, the other killer, Joe Cubbah, makes plans of his own. Cubbah kills a state trooper and uses his uniform to gain access to the circle of security around Horn. Cubbah does not know what Berryman looks like and hopes to identify him when he kills Horn. Cubbah does identify Berryman, but is shocked when Berryman fires a gun equipped with a silencer in order to make it appear that Poole killed Horn. As a result, Cubbah is unable to kill Berryman in the crowd, but does shoot Poole.

Berryman leaves the rally and takes his girlfriend into a store where they pretend to be innocent shoppers. Later, they sit in traffic, waiting for the emergency vehicles to clear out of the way so they can leave. As they wait, Cubbah stabs Berryman in the chest and leaves him for Oona to take care of. Ochs learns all this when he visits Cubbah in prison after his conviction for the murder of the state trooper. Later, Berryman's body is discovered in a field. The man behind the entire ordeal, Johnboy Terrell, is murdered while awaiting trial on his part in Horn's death.

More summaries and resources for teaching or studying The Thomas Berryman Number.