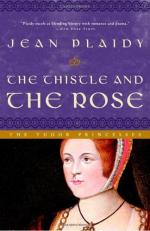 Plot Summary
+Chapters Summary and Analysis
The Betrothed, The Bridegroom, and The Rose and the Thistle
The Curse of Sauchieburn and The Wild Knight
The Reckless Marriage and the Deserted Queen
The Daisy, Marigold, Pomagranate and Rose, and The Unfaithful Husband
Margaret and Albany and The Queen's Lover
The Queen's Third Marriage and The Last Days
Free Quiz
Characters
Objects/Places
Themes
Style
Quotes
Topics for Discussion
Order our The Thistle and the Rose Study Guide

The Thistle and the Rose Summary & Study Guide

Eleanor Hibbert and Jean Plaidy
This Study Guide consists of approximately 32 pages of chapter summaries, quotes, character analysis, themes, and more - everything you need to sharpen your knowledge of The Thistle and the Rose.

The Thistle and the Rose Summary & Study Guide Description

The Thistle and the Rose Summary & Study Guide includes comprehensive information and analysis to help you understand the book. This study guide contains the following sections:

This detailed literature summary also contains Topics for Discussion and a Free Quiz on The Thistle and the Rose by Eleanor Hibbert and Jean Plaidy.

Margaret Tudor is twelve when her betrothal to the King of Scotland, James IV, comes to fruition. She tells her brother, Henry VIII who is the future king of England, that she is excited about her upcoming position on the throne of Scotland but secretly admits that she is frightened about the move. Margaret's mother dies giving birth and Margaret will later remember that her mother died doing what women of her class are expected to do - produce an heir. Margaret arrives in Scotland to find that her husband is sensuous and apparently devoted to her. Then she finds out that he'd had a mistress named Margaret Drummond and another named Janet Kennedy, and that he has fathered children by both women. Upon this discovery, Margaret is angry but James is unrepentant.

As time passes, Margaret gives birth to several children who die before having two that survive, sons named James and Alexander. Meanwhile Margaret grows angrier that James continues his affairs. When James goes to battle against Margaret's native England, he encounters a woman alone at a border castle and enters into an affair with her. He goes on for several days while the English amass an army. When James finally meets the English on the battlefield, he's out numbered and thousands of the Scottish soldiers die, including James and his illegitimate son.

Margaret, now a widow, finds that she has no say in the care of her sons as the country's government takes over control of the two young boys. When Margaret marries the Earl of Angus less than a year later, she has little support and eventually comes up with a plan to leave the country with Angus and her sons, planning to go to England, her native country where her brother is now king. The plan to kidnap the two young boys fails and Margaret ends up returning to England with Angus. She gives birth to a daughter on the way and then Angus deserts her in order to return to Scotland. While in England, Margaret learns that her youngest son has died. When Margaret returns to Scotland a year later, she is ready to make peace with her husband and with the Duke of Albany who has been named Regent. Angus, however, has returned to the woman to whom he'd been betrothed prior to his marriage to Margaret and has no intention of giving up this woman.

Margaret is eventually granted a divorce and spends time with her son, James, who will become King of Scotland. He is held a virtual prisoner as opposing factions seek a way to retain control of the future king. Margaret encounters a new young man in the service of James and feels confident that this will be the happy marriage she'd always hoped for. However, she comes to discover that this man is also unfaithful and has fathered a child while married to Margaret. Margaret continues her days, largely alone, and realizes that she is no longer seeking a way to retain or regain power and is living a quieter life than ever before. One day she feels ill and, realizing it's serious, sends for James, but dies before he arrives.

More summaries and resources for teaching or studying The Thistle and the Rose.

The Thistle and the Rose from BookRags. (c)2022 BookRags, Inc. All rights reserved.