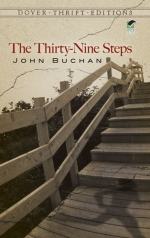 John Buchan, 1st Baron Tweedsmuir
This Study Guide consists of approximately 35 pages of chapter summaries, quotes, character analysis, themes, and more - everything you need to sharpen your knowledge of The Thirty-Nine Steps.

This detailed literature summary also contains Topics for Discussion and a Free Quiz on The Thirty-Nine Steps by John Buchan, 1st Baron Tweedsmuir.

The Thirty-Nine Steps is an adventure spy novel by John Buchan written in 1914. Told from the first-person point of view, it relates the adventure of "ordinary fellow" Richard Hannay, who is thrust into a plot involving the theft of crucial military intelligence by German anarchists.

Richard Hannay's ordinary life is shattered when he receives a frantic visitor, Scudder, who tells Hannay of a sinister plot by anarchists to assassinate the Greek Premier. Hannay allows the man to stay in his flat to hide out. Scudder writes down the whole plot in a black note book. One day Hannay arrives to the flat to find it ransacked and Scudder dead with a knife in the back. Thinking the police would not believe he was innocent, Hannay becomes a man on the run, pursued under false pretenses by the police and evil anarchists.

On the run, Hannay manages to break the code of the black book (Scudder wrote in code), and finds that the plot is even more sinister than Scudder led on. German anarchists, called the Black Stone, plan to steal British naval intelligence in order to establish a naval blockade around England, starting a war across all of Europe.

Hannay eventually steals a police car only to send it off into a ravine as he barely escapes with his life by clutching onto a branch. Nearby is a kind young innkeeper, Sir Harry, who Hannay confides in. Sir Harry agrees to help him by sending a letter to his godfather, a politician named Sir Walter Bullivant.

Hannay soon goes on the run again, this time taking on the guise of a poor road-mender. Subsequently, Hannay stumbles across a remote Scottish mansion owned by an old archaeologist. Hannay realizes with horror that the archaeologist is a member of Black Stone. Hannay saves himself by swearing to be someone else. The archaeologist locks him in a room in order to discern his identity, and Hannay escapes by finding some explosive mining material, enough to blast the room (and his guards) apart.

Hannay makes his way back to London via train, and he manages to find Sir Walter Bullivant. Hannay explains the whole affair to Bullivant, and the severity of the situation is made clear when they get word that the Greek Premier Karolides was assassinated only hours before.

Bullivant is to be part of a meeting that night discussing the very military intelligence at stake. In one of the meeting's participants, the British Sea Lord Alloa, Hannay notices a flash of recognition in the man's eyes that tells him that Alloa is the traitor. They must now find out where the Black Stone will depart England from. At this point Hannay remembers a cryptic portion of Scudder's black book, describing "Thirty-Nine Steps" and a "high tide" occurring at "10:17pm." Hannay narrows the Black Stone's likely exit point to the east coast in a small ship like a yacht, at a place that doesn't have a harbor, with high tide at 10:17pm. A coastguard is brought in with knowledge of the east coast, and he recalls a portion of the coast, a private beach with steps running down to the shore, with a high tide occurring at 10:17 p.m.

Hannay scopes out the area. One home, Trafalgar Lodge, has steps leading down to the beach numbering exactly thirty-nine. Hannay accuses the three male residents of the Lodge of espionage, and manages to pierce the residents' disguises after some doubt (they appear to be middle-class Brits, but are in fact the German Black Stone spies). In the briefest of epilogues, Hannay reveals he has since joined the British Army.

More summaries and resources for teaching or studying The Thirty-Nine Steps.