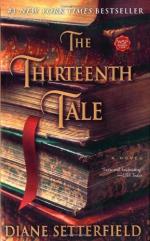 Related Topics
Once Upon a River

Diane Setterfield
This Study Guide consists of approximately 56 pages of chapter summaries, quotes, character analysis, themes, and more - everything you need to sharpen your knowledge of The Thirteenth Tale.

This detailed literature summary also contains Topics for Discussion and a Free Quiz on The Thirteenth Tale by Diane Setterfield.

The Thirteenth Tale is a novel in the tradition of the Bronte sisters by new writer Diane Setterfield. The main character, Margaret Lea, is invited to write the life story of bestselling author, Vida Winter, who has spent her entire career making up her past. Margaret is hesitant, convinced that the master storyteller will lie to her just like she lied to all the others. However, lured by Miss Winter's Victorian style of writing, Margaret takes the contract and quickly realizes that by learning Miss Winter's secret she will be forced to confront a secret of her own. The Thirteenth Tale is a story that has all the elements of classic English literature and all the mystery of a modern day blockbuster.

Margaret receives a letter from a modern writer she has heard of but is unfamiliar with. The writer, Miss Vida Winter, would like Margaret to write her life story. While Margaret has written several essays on famous people, she is not a biographer and has never taken on a living subject. Margaret's tastes, both in her work and her leisure reading, lie in the past. However, after reading Miss Winter's novels, Margaret decides to take on the contract.

Miss Winter is a stern, quiet woman who does not appear to be overly friendly when Margaret first meets her. Miss Winter sets down a few ground rules that include telling her story from beginning to end without interruption or questions that will interrupt this flow of story telling. Margaret agrees and begins to listen to the story. Miss Winter begins before her own birth with the birth of Isabelle, the daughter of a wealthy but eccentric man. Isabelle is a spoiled child who becomes the obsession of her father to the exclusion of everything else, including her older brother. As an adult, however, Isabelle forges a relationship with her brother that takes on elements of incest. When Isabelle runs away to marry, her father is so devastated that he dies an untimely death.

Isabelle returns to the house some months later with her two infant children, twin girls. Charlie, her brother, welcomes Isabelle home and the two become so wrapped up in each other that the twins are put aside and forgotten. The housekeeper, the Missus, takes over the care of the babies, doing the best she can. However, the housekeeper is old and can only control their behavior so much. The twins become unruly, terrorizing the house and the neighboring village, constantly getting into trouble. This trouble becomes so worrisome for the local doctor that he decides to send his wife to speak to Isabelle and Charlie about controlling the girls. While in the house, the wife is hit over the head with a violin and she points the finger at Isabelle. Isabelle is promptly sent to an asylum, leaving Charlie in a homicidal depression and the girls once again without proper supervision.

In order to make sure Miss Winter is telling the truth about her past, Margaret returns home for a short time to check a few of the facts. Margaret quickly ascertains that the Angelfields, the family Miss Winter claims to be a member of, did exist. Not only this, but Margaret visits the house where the bulk of Miss Winter's story took place and finds it in ruins but still in existence. During a tour of the house, Margaret meets Aurelius, a sixty-something caterer who lives in the area. Margaret instantly makes friends with Aurelius, and drawn in by his story of abandonment feels a connection. Margaret once had a twin, but her parents kept this information secret from her until she learned the truth by accident as a child. It is this that causes Margaret to feel a connection not only with Aurelius, but Miss Winter as well.

Miss Winter continues her story, telling Margaret about the governess the doctor arranged to bring to Angelfield House to care for the twins in their mother's absence. The governess is an intelligent woman, more intelligent than her station in life allows. The governess observes the twins and sees that they have each taken on elements of a personality that the other does not have, as if they are two halves of one whole. The governess thinks if they separate the twins they might be able to create two whole people. However, the experiment backfires when the twins sink into a catatonic state and when the governess falls in love with her partner, the doctor.

After the governess leaves, the house sinks into disrepair worse than before. Charlie, who has hidden himself in the old nursery since his sister's departure, disappears shortly after learning about the death of his sister. Miss Winter reveals to Margaret that she found his body in a hovel in the woods, but chose not to tell anyone because she did not see what good it would do. John-the-dig, the gardener at Angelfield House, decided it would be best not to tell anyone about Charlie's disappearance either, since they depended on money from Charlie's solicitor to survive. The odd group in Angelfield House continued on as they always had, even after the Missus died, surviving on as little as possible until the day John-the-dig died. At that point, one of the girls was forced to go to the solicitor and confess Charlie's absence as well as John's death.

At this point, Margaret had discovered that Emmeline, one of the twins, lived in the house with Miss Winter. Margaret had been told and assumed on her own that Miss Winter was Adeline, the other twin. However, upon reading a diary written by the governess and by putting things together based on Miss Winter's narrative, Margaret came to realize that there was a third girl living at Angelfield House. When confronted, Miss Winter admitted that there was. A child had been abandoned in the gardens of the old house and, once he was cleaned up, John-the-dig recognized the connection between this child and Charlie, knowing he must be her father. John kept the child at the house, feeling she had as much right to be there as any of them, but keeping her existence secret to protect her. Miss Winter is this child.

Margaret returns to the Angelfield House ruins to see Aurelius. When she arrives, Margaret discovers that the construction crew that is demolishing the ruins has found bones in the library. Margaret returns to Miss Winter's to confront her about these bones, assuming them to be those of the governess. There Miss Winter reveals the truth about the unnamed child and the baby Emmeline gave birth to in the months after John-the-dig's death. Adeline was insanely jealous of the baby and constantly attempted to kill him. One night, the unnamed girl caught Adeline attempting to burn the baby in the fireplace. The girl saved the baby and hid him away, returning to the house just in time to watch it go up in flames. The girl went into the house to rescue Emmeline, pulling her from the flames just before the fire grew out of control. The girl then took the baby to the home of a kind woman who lived in the woods, a baby who Margaret now knows to be Aurelius, before returning to the house where she is mistaken for Adeline.

More summaries and resources for teaching or studying The Thirteenth Tale.