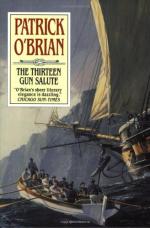 Patrick O'Brian
This Study Guide consists of approximately 34 pages of chapter summaries, quotes, character analysis, themes, and more - everything you need to sharpen your knowledge of The Thirteen-gun Salute.

This detailed literature summary also contains Topics for Discussion and a Free Quiz on The Thirteen-gun Salute by Patrick O'Brian.

The novel, the thirteenth volume in a series that extends to twenty completed novels, is set during the prolonged war between England and Napoleon's France. The two primary protagonists, Jack Aubrey and Stephen Maturin, are particular friends of long acquaintance. Aubrey has spent most of his life as an officer in the Royal Navy, eventually rising to the rank of post-captain. However, political enemies have contrived to falsely accuse him of financial crimes which has resulted in his ejection from the navy. Recently, Aubrey's accusers have in turn been discredited as traitors and have fled England for France; nevertheless, Aubrey remains a private citizen. Maturin is a natural philosopher and surgeon of great skill; he also works as a covert intelligence agent for the Royal Navy. Maturin, a man of means, owns Surprise, a letter of marque captained by Aubrey. The ship has a long-standing mission to travel to South America, but the planned voyage has been interrupted several times. The novel opens with Surprise departing for South America only to be diverted, at Lisbon, back to England due to recent developments between England and Spain. In England, Aubrey formally is reinstated in the Royal Navy and, along with Maturin, is appointed to HMS Diane; Surprise continues on as a letter of marque under the capable captaincy of Tom Pullings.

Diane sets off for Pulo Prabang, a Malay state in the South China Sea. Diane conveys Mr Edward Fox, the English envoy, and his retinue. Fox proves a complex and excessively proud man who rubs most of the crew the wrong way. Aubrey and especially Maturin make great efforts to get along with Fox. The envoy travels through much adventure to Pulo Prabang and meets with the Sultan. The Sultan is being simultaneously wooed by France and the French delegation includes Ledward and Wray, the very two traitors who wrongly implicated Aubrey in financial improprieties. The politicking drags on and on as the English delegation gradually gains the upper hand. Throughout the period Maturin enjoys a prolonged stay ashore observing and often collecting the local flora and fauna. Maturin also meets and befriends van Buren, a biologist of international repute. The diplomatic situation finally tips markedly in favor of the English when Ledward and Wray are discovered in a homosexual tryst with the Sultan's young cupbearer and favorite catamite Abdul. Abdul is put to death and Ledward and Wray are ejected from the palace and formally released from Royal protection as the French delegation collapses. While Fox concludes an English treaty with the sultan Maturin arranges for the assassination of Ledward and Wray. Later, he and van Buren fully dissect the two cadavers of his erstwhile enemies.

Diane then departs for Batavia and a planned rendezvous with Surprise. During the voyage Fox becomes increasingly egotistical and offensive and entirely alienates Maturin and Aubrey. Diane then runs aground on an uncharted reef. Aubrey supervises a partial evacuation to a nearby island while repairs begin. Fox, impatient to carry news of his success to England, departs in the ship's largest boat for Batavia, only a few hundred miles distant. Diane's demise occurs when an unseasonable storm shatters her against the reef before she can be floated off; Aubrey surmises that Fox must surely have perished in the same storm. The novel ends with Aubrey surveying substantial pieces of Diane's wreckage that have washed ashore; he and his associates begin to plan the construction of a smaller ship from the remaining pieces.

More summaries and resources for teaching or studying The Thirteen-gun Salute.