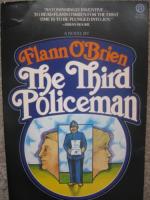 Brian O'Nolan
This Study Guide consists of approximately 30 pages of chapter summaries, quotes, character analysis, themes, and more - everything you need to sharpen your knowledge of The Third Policeman.

This detailed literature summary also contains Topics for Discussion and a Free Quiz on The Third Policeman by Brian O'Nolan.

The unnamed narrator of The Third Policeman is obsessed with the bizarre philosopher de Selby, and in order to publish a book about de Selby, the narrator agrees to murder a man for his money. However, the narrator's partner in turn murders the narrator, who is thrust into a bizarre journey through the afterlife. The narrator tries to piece together what is happening and finally finds his way home, where he discovers that he's been murdered and must start his hellish journey over again.

The narrator is a farmer's son whose parents die when he is young. He is sent off to school, and the farm is left in John Divney's charge. The narrator discovers the words of de Selby at school, and when he returns, now sporting a wooden leg due to an accident, he allows the dishonest Divney to run the farm while the narrator studies and writes a book about de Selby.

Divney convinces the narrator to partner with him to murder a local man named Mathers. The two brutally murder and rob him, but Divney hides Mathers' moneybox and won't tell the narrator where it is. The narrator refuses to leave Divney's side out of fear that Divney will run off with the loot. Finally, Divney tells the narrator that the moneybox is hidden under the floorboards in Mathers' house. The narrator goes to retrieve it, and he is on the point of opening the box when it mysteriously vanishes.

Mathers' body is discovered, seemingly killed by the murderer the narrator recently met, but the narrator himself is arrested for the crime and scheduled to be hanged. While he's waiting his execution, the policemen show the narrator 'eternity,' an underground facility where anything can be made from nothing, but nothing can be removed from it. Mathers finally escapes on Sergeant Pluck's bicycle and rides back toward his home.

When the narrator passes Mathers' house again, he meets the third policeman, Policeman Fox, who seems to have Mathers' face. Fox tells the narrator that he's found the missing moneybox, which can be found at the narrator's home. However, when the narrator reaches his farmhouse, he finds that it's sixteen years later. Divney collapses in shock at seeing the narrator's ghost, shouting out that he killed the narrator sixteen years ago with a bomb in the supposed moneybox. The narrator flees back down the road, finding himself again at the police barracks, without his memory, and about to start the same adventure over.

More summaries and resources for teaching or studying The Third Policeman.