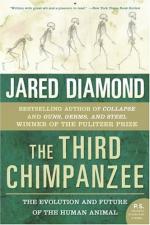 The Third Chimpanzee: the Evolution and Future of the Human Animal - Chapter 16, In Black and White Summary & Analysis

Chapter 16, In Black and White Summary and Analysis

Genocide is rather loosely defined as the mass killing of an identifiable demographic of people simply because of their demographic association. The text then provides three world maps that indicate the locations and times of various documented genocidal events occurring from 1492 through 1900, 1900 through 1950, and 1950 through 1990. Not all genocidal events are included in the maps and tables.

Genocide is thus established as an unfortunately common occurrence in human...

(read more from the Chapter 16, In Black and White Summary)

The Third Chimpanzee: the Evolution and Future of the Human Animal from BookRags. (c)2022 BookRags, Inc. All rights reserved.