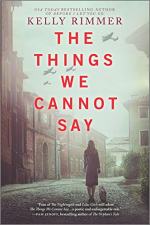 Kelly Rimmer
This Study Guide consists of approximately 68 pages of chapter summaries, quotes, character analysis, themes, and more - everything you need to sharpen your knowledge of The Things We Cannot Say.

In Chapter 5, Alina decided that Mateusz and Truda were the only people she trusted to care for Emilia. When Truda found Emilia and Alina waiting on the front steps, Alina feared she would turn them away. Instead, Truda told Emilia that they needed to get her bed arranged. Mateusz picked Emilia up and cradled her like a baby. Later, Alina’s mother, Faustina, complimented Alina when she said she had taken Emilia to Truda.

Alina learned from her parents that the Germans planned to take the farms and give them to German settlers. They believed as long as their farm was productive they would be allowed to stay. Later that night, Alina worried that Tomasz might already be dead, like his father, because he was studying to be a doctor.

Meanwhile, Jewish businesses and homes were confiscated. The Jews were forced to live...

More summaries and resources for teaching or studying The Things We Cannot Say.

The Things We Cannot Say from BookRags. (c)2022 BookRags, Inc. All rights reserved.