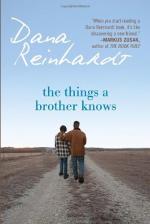 Dana Reinhardt
This Study Guide consists of approximately 38 pages of chapter summaries, quotes, character analysis, themes, and more - everything you need to sharpen your knowledge of The Things a Brother Knows.

The Things a Brother Knows Summary & Study Guide includes comprehensive information and analysis to help you understand the book. This study guide contains the following sections:

This detailed literature summary also contains Topics for Discussion and a Free Quiz on The Things a Brother Knows by Dana Reinhardt.

"The Things a Brother Knows" by Dana Reinhardt tells the story of Levi Katznelson, a seventeen-year-old high school student who lives with his parents, Amanda and Reuben, and his brother, Boaz. As the story unfolds, Boaz is due to come home that night from a three-year tour with the Marines in an overseas war. Although the identity of the war-torn country is not revealed, the earmarks described in the story all point to the battlefields of Iraq or Afghanistan.

Levi has mixed feelings about his brother returning home. He is nearly humiliated when the principal of his school holds an assembly to announce that war hero Boaz Katznelson is returning home. It seems that everyone loved Boaz even those who barely knew him. Boaz is a very cool guy. He was good looking, tall, smart and charming. Levi has always looked up to his big brother and wants to be just like him. In reality, Levi feels inferior to Boaz and fears he could never be like him.

But during the three years that Boaz is gone, Levi begins to notice changes in his brother—changes that are very disturbing. The once engaging and glib brother seems to have less and less to say every time he comes home. Sometimes when the family knew that he was on leave, he didn't even come home or call. Levi is most concerned about his parents and grandfather, affectionately known as Dov. They worry about Boaz and cannot wait to see him. Amanda, Levi's mother, worries the most. She has been cleaning non-stop since Boaz left hoping to be distracted from her fears.

But now everything will be fine. The remoteness that everyone noticed will go away and Boaz will return and be his old self. But that will not be the case. Boaz stays in his room and will only holler through the door that he is sleeping when his mother tries to get him to come downstairs to eat. Amanda is deluding herself that Boaz will be fine. He just needs time. But Levi does not buy it.

Levi begins to gather that there is something very wrong with his brother. Through some subtle investigation, Levi learns that Boaz is planning some big mission. There are maps of the northwest US all over his room with addresses marked all over them. Levi is able to hack into Boaz' email account and learns that he has plans to meet up with some people Levi never heard of. When Boaz tells the family that he was going hiking on the Appalachian Trail, Levi knows that he is lying. Boaz takes off but Levi is soon on his heels. He catches up with his brother and insists on going with him. Levi does not know where they are going and does not know what the mission is and Boaz will not tell him. But that does not deter Levi. He tenaciously stays right with him.

In the end, Levi learns to understand to some degree the horrors that his brother has experienced on the battlefield. He also learns that he is as important to his brother as he has ever been. The story emphasizes that there are multiple victims of war - soldiers, civilians, and even the enemy - and that being a "brother" has more than one meaning.

More summaries and resources for teaching or studying The Things a Brother Knows.

The Things a Brother Knows from BookRags. (c)2022 BookRags, Inc. All rights reserved.