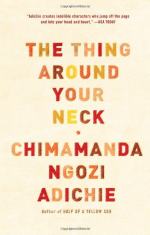 Related Topics
Americanah
Half of a Yellow Sun
We Should All Be Feminists
Dear Ijeawele, or A Feminist Manifesto in Fifteen Suggestions
Zikora: A Short Story

The Thing Around Your Neck Summary & Study Guide

Chimamanda Ngozi Adichie
This Study Guide consists of approximately 79 pages of chapter summaries, quotes, character analysis, themes, and more - everything you need to sharpen your knowledge of The Thing Around Your Neck.

The Thing Around Your Neck Summary & Study Guide Description

The Thing Around Your Neck Summary & Study Guide includes comprehensive information and analysis to help you understand the book. This study guide contains the following sections:

This detailed literature summary also contains Quotes and a Free Quiz on The Thing Around Your Neck by Chimamanda Ngozi Adichie.

The stories included in the collection “The Thing Around Your Neck” by Chimamanda Ngozi Adichie deal with a variety of issues faced by Nigerians and Nigerian-Americans. A good deal of the stories deal with the clash in cultures between the lifestyle of Nigerians living in Nigeria and those living in America. Another theme dealt with in several of the stories is the idea that life in America turned out to be a disappointment for some Nigerians who went there looking for a better life. Other ideas addressed in the stories include relationships, children and women.

In the story “Cell One”, a pampered son learned a lesson when he was sent to jail as a murder suspect and saw an innocent old man abused there. In the story “Imitation”, a wife and mother gives up the advantages of living in America in an attempt to keep her husband from having a live-in girlfriend in Nigeria. “A Private Experience” tells the story of a Christian woman and a Muslim woman who take refuge together during a riot between Christians and Muslims. A professor reminisced on his life after he saw a former colleague he believed was dead in the story “Ghosts.” Although he admitted his experiences to no one, the professor also believed he was being visited by the ghost of his late wife.

“On Monday of Last Week” is the story of a woman deeply dissatisfied by her new life in America. “Jumping Monkey Hill” tells about the reality of racial and sexual bias in Africa. “The Thing Around Your Neck” highlights the differences between the perception of America by Africans as a land of opportunity and riches, and the reality of life in America. In the story “The American Embassy” a woman abandoned her attempt to be granted asylum because she felt the woman interviewing her did not understand her or her problems. A woman and a gay man from Nigeria living in America form a friendship when they came together to pray after a plane crash in their country in the story “The Shivering.” Together, they explored faith and their former unhealthy relationships.

In the story “The Arrangers of Marriage” a woman struggled to adjust to life in America and her new husband who wanted to assimilate completely with American culture. A family was devastated when the oldest born son died when he fell from a tree in the story “Tomorrow is Too Far.” In “The Headstrong Historian” the daughter of a Nigerian converted Christianity delved into her family’s history to the delight of her grandmother.

More summaries and resources for teaching or studying The Thing Around Your Neck.

The Thing Around Your Neck from BookRags. (c)2022 BookRags, Inc. All rights reserved.