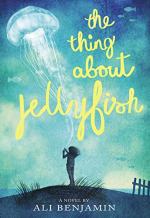 The Thing About Jellyfish - Part Six: Immortality — Part Six: She Made It Summary & Analysis

In the introduction to this section “Results” Suzy includes her science teacher’s explanation of the results section of a paper. This is the section of a paper that tells if the research supports or doesn’t support the hypothesis.

In “Immortality” Suzy describes a type of jellyfish that is considered immortal in that it can return to a younger stage from the adult stage. She wished humans could do the same. Suzy believed if she had been able to do that she would never have had to send Franny the message she did and everything would still be okay between them.

In “To Australia” Suzy believed that if she were confident enough, she could successfully make her trip even though she was scared. She felt she had prepared for her journey as well as she could...

(read more from the Part Six: Immortality — Part Six: She Made It Summary)

The Thing About Jellyfish from BookRags. (c)2022 BookRags, Inc. All rights reserved.