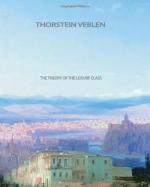 Thorstein Veblen
This Study Guide consists of approximately 35 pages of chapter summaries, quotes, character analysis, themes, and more - everything you need to sharpen your knowledge of The Theory of the Leisure Class.

The Belief in Luck Summary and Analysis

"The gambling propensity is another subsidiary trait of the barbarian temperament. It is a concomitant variation of character of almost universal prevalence among sporting men and among men given to warlike and emulative activities generally. This trait also has a direct economic value. It is recognised to be a hindrance to the highest industrial efficiency of the aggregate in any community where it prevails in an appreciable degree" (Chap. 11, p. 276).

The reason for gambling is the belief in luck, and the activity isn't confined to the leisure class. Veblen says that this belief in luck predates the predatory culture. It is considered to be an archaic trait and is basically considered as a hindrance to the community.

When betting is applied to sports, luck isn't the only factor in play. There is also the pride...

(read more from the The Belief in Luck Summary)

More summaries and resources for teaching or studying The Theory of the Leisure Class.

The Theory of the Leisure Class from BookRags. (c)2021 BookRags, Inc. All rights reserved.