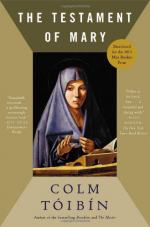 The Testament of Mary Summary & Study Guide includes comprehensive information and analysis to help you understand the book. This study guide contains the following sections:

This detailed literature summary also contains Quotes and a Free Quiz on The Testament of Mary by .

NOTE: All citations refer to the Kindle version of The Testament of Mary. As such, page numbers could vary on different devices.

Colm Tóibín’s novel The Testament of Mary gives a gut-wrenching look at the crucifixion of Jesus from the fictional viewpoint of Mary, his mother. Mary’s story is written in the months after the crucifixion when Jesus’ followers are questioning her for information to write stories of Jesus’ life and death. As Mary tries to come to terms with her own grief and regrets, she still lives with the fear that she will be killed because of her son’s actions. When Mary learns that the men who followed Jesus believe that he died to redeem the world, she tells them that she believes the world is not worth the sacrifice.

Two of Jesus’ followers visit Mary regularly to discuss the events of the crucifixion. She does not like the men, even though they do take care of her needs. She senses that they are suspicious of her and are impatient with her reluctance to cooperate. Mary remembers the cruelty, the viciousness, and the confusion of that day. She senses the men’s frustration when she tells them only the details that she knows to be true.

Mary’s narrative includes the stories of the raising of Lazarus from the dead and Jesus’ act of changing water into wine. Mary describes an unnatural feel surrounding both instances. When Mary saw Lazarus return from the dead, he appeared to be someone who seemed to be steps from dying again. He was weak and kept to himself. Perhaps, he had experienced a frightening revelation that he was not comfortable sharing with anyone.

Mary’s deepest regret from the day of her son’s death is that she did not stay with him until he died. She had seen a man who was pointing her out to a man known as "the strangler." Frightened, she told her guide that they were in danger. Fearing for her life, Mary left Jerusalem before the crucifixion was finished. Later, Mary was angered by the men when they insisted that she had been at the site of the crucifixion when Jesus had been taken from the cross and that she had watched as the body was prepared for burial. She knows the versions of the stories the men are writing are based on what they want to be true, not the truth.

The Testament of Mary from BookRags. (c)2022 BookRags, Inc. All rights reserved.