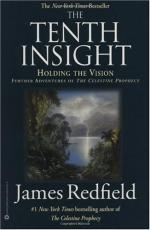 James Redfield
This Study Guide consists of approximately 44 pages of chapter summaries, quotes, character analysis, themes, and more - everything you need to sharpen your knowledge of The Tenth Insight.

This detailed literature summary also contains Topics for Discussion and a Free Quiz on The Tenth Insight: Holding the Vision by James Redfield.

This novel is a sequel to The Celestine Prophecy, a popular (so-called New Age) narrative of spiritual exploration and enlightenment. At the same time as he searches for a friend and uncovers what appears to be a mysterious, powerful conspiracy, the narrator from the first book expands his spiritual quest, encountering new allies and discovering a new and deeper purpose for his life. As he does so, the narrative explores themes relating to the nature of spiritual enlightenment and the increased personal empowerment resulting from that enlightenment.

The narrative begins with a chapter of exposition, referring briefly to the events of the previous novel and explaining the circumstances that brought the narrator to this new phase of his explorations - the mysterious disappearance of his friend Charlene, with whom he had begun to deepen exploration of the Nine Insights he discovered in the first book. As he prepares to follow Charlene into a valley in the Appalachian Mountains (indicated by a map found at her office as her destination), the narrator encounters David Long Eagle, familiar with the Insights and with Charlene. As the narrator experiences memories of encounters with Long Eagle in a previous life, Long Eagle warns him about the dangers of the valley and instructs him to look for a man named Curtis Webber.

The next day, the narrator begins his journey into the valley, following his instincts deeper and deeper into its wilder heart. At one point, he arrives at a waterfall emptying into a pool, and has a sense of encountering a familiar spiritual presence. He moves himself into a meditative state and encounters Wil, a spiritually enlightened individual from the first book, who tells him he (the narrator) is about to embark on a search for the Tenth Insight and that he (Wil) hopes to be able to help him along. Their encounter (taking place on a higher spiritual energy plane, according to Wil) is interrupted by a tearing, dissonant sound which takes the narrator back to the physical plane.

The next several chapters alternate between the narrator's encounters with other travelers in the valley (the cynical Joel, the nurturing but nervous physician Maya, the angry Curtis Webber) and return encounters with Wil. Each encounter moves the narrator and the other characters closer to an understanding of the Tenth Insight. Together and separately, they all develop awareness that they were connected in a previous existence, and that they are all share relationships with the powerful forces of the Birth Vision, the World Vision, the Soul Group, and the group of seven.

Eventually, the narrator, with the help of Webber and Maya, is reunited with Charlene. Together, the four allies develop their intuitions further, even as the tearing dissonance (which Webber terms the Experiment) increases in power and frequency. The allies realize that the Experiment is, in fact, a product of the Fear, the universal human experience of resistance to the sort of change that everyone needs to live through in order to realize enlightenment. The allies make repeated efforts to apply their lessons in order to stop the Experiment, finally succeeding when they realize that its head scientist, a man named Feyman, is, like them, a member of the mysterious group of seven with the power to bring enlightenment into the world.

After their final attempt at stopping the Experiment is successful, the allies go their separate ways. The narrator and Charlene have one last encounter with Wil, who enigmatically hints that for all three, there are new levels of awareness to explore. The narrator and Charlene, who seem to share some kind of sensual/romantic connection, feel their explorations lie in a different direction from Wil's, but nonetheless end the narrative believing that they will encounter him again soon.