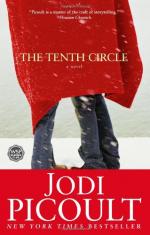 Jodi Picoult
This Study Guide consists of approximately 30 pages of chapter summaries, quotes, character analysis, themes, and more - everything you need to sharpen your knowledge of The Tenth Circle.

This detailed literature summary also contains Topics for Discussion on The Tenth Circle by Jodi Picoult.

Trixie Stone is the fourteen-year-old daughter of Daniel and Laura Stone. She's just broken up with her boyfriend, Jason, and is heartbroken over the break-up. Trixie tells Jason that she can't continue without him but Jason remains determined that their relationship is at an end. Trixie's friend, Zephyr, tells Trixie the best way to get Jason's renewed attention is to make him jealous. Therefore, Zephyr has a party with no adult supervision. There are several sexual games played during the party and Trixie begins participating but finds she can't go through with it and quits. After the party breaks up, only Trixie, Zephyr, Jason, and Jason's friend Moss remain. The four play strip poker but as the evening progresses, Zephyr and Moss go to a bedroom together. Later in the night, Jason finds Trixie in the bathroom and they wind up holding each other and then have sex.

Trixie goes home and locks herself in the bathroom where her father finds her, crying. Her father, Daniel, asks what's wrong and Trixie says that Jason raped her. Daniel takes Trixie to the emergency room and calls his wife, Laura, but it's hours later before Laura returns the call and goes to the hospital. Laura had been with her lover, a young man who is a student in her class. Laura had actually told the young man, Seth, that evening that she was breaking off her relationship with him.

The stories of Trixie's rape hit the papers because Jason is a hockey champion in their town. Trixie is harassed at school and has trouble dealing with the notoriety. Laura and Daniel work on their marriage and try to get past Laura's infidelity. Meanwhile, they remember their past history. Daniel was born and raised in Alaska but was treated badly by his peers because he is half-white. His best friend had committed suicide and Daniel had initially been blamed. He'd been exonerated but left Alaska anyway and never returned.

Questions soon arise as to Trixie's credibility and many people believe that she is actually seeking revenge on Jason for their breakup. Jason insists they had sex months earlier though Trixie had said she was a virgin until the night of Zephyr's party. Other questions arise and when it is proved that Trixie had been raped, the charges against Jason escalate.

When Jason turns up dead, it looks as if Daniel might have followed through on his threat to kill Jason. Attention is also focused on Trixie based partly on the hair that's found in Jason's watch band. However, it's later discovered that Laura had confronted Jason and had accidentally caused his death.

More summaries and resources for teaching or studying The Tenth Circle.