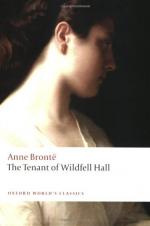 Anne Brontë
This Study Guide consists of approximately 41 pages of chapter summaries, quotes, character analysis, themes, and more - everything you need to sharpen your knowledge of The Tenant of Wildfell Hall.

The Tenant of Wildfell Hall Summary & Study Guide includes comprehensive information and analysis to help you understand the book. This study guide contains the following sections:

This detailed literature summary also contains Topics for Discussion and a Free Quiz on The Tenant of Wildfell Hall by Anne Brontë.

The Tenant of Wildfell Hall is the second novel by Anne Bronte. In this novel, Anne Bronte tells the story of Mrs. Huntingdon, the wife of an alcoholic from whom she feels it necessary to protect her son. Mrs. Huntingdon runs away from her husband, taking her son and living in her ancestry home under the name of Mrs. Graham, a widow living on what she can make selling paintings. During this time, Mrs. Graham meets and falls in love with a local farmer, Mr. Gilbert Markham, whose love she cannot return until the death of her husband or dissolution of her marriage. The Tenant of Wildfell Hall was highly controversial when it was originally published and continues to be a novel characterized by its unique insight into the psychology of marriage.

Mr. Gilbert Markham is writing a letter to his brother-in-law in which he is telling a highly personal story in return for one his brother-in-law told him. This story begins in the fall of 1827 when Mr. Markham became aware of the arrival of a tenant in the abandoned Wildfell Hall. Just as curious as the rest of his neighbors, Mr. Markham finds this widow, Mrs. Graham, to be highly opinionated, independent, and excitingly beautiful. Mr. Markham sets out to befriend this woman, but is rebuffed in nearly every attempt. However, Mr. Markham invites himself along each time his sister goes to visit Mrs. Graham and manages to talk Mrs. Graham into going to the shore with him and his friends. During this time, Mr. Markham befriends Mrs. Graham's five-year-old son and soon finds this to be a doorway into Mrs. Graham's affections.

Finally Mrs. Graham convinces Mr. Markham to come speak to her. When Mrs. Graham learns what Mr. Markham overheard between herself and Mr. Lawrence, she gives him her diary to read, promising it will explain everything. The diary begins six years before Mr. Markham met Mrs. Graham. Mrs. Graham begins by describing her first season in London in search of a husband. Mrs. Graham, or Helen as she was called at the time, is not pleased with any of these men because they are all old. There is one man, however, a Mr. Huntingdon, that she finds dashing. Despite her aunt's warnings against marrying a man without virtue, Helen falls deeply in love with Mr. Huntingdon.

Mr. Huntingdon comes to Staningley, the home of Helen's uncle, in order to hunt. During this time, Mr. Huntingdon learns of Helen's affections for him and begins spending his time with Annabella Hargrave instead. Soon Helen learns he has done this to make her jealous and that he really loves her. Soon they are engaged to be married, despite the reservations of Helen's family and friends. Marriage proves to be bliss at first, despite some odd behaviors on Mr. Huntingdon's part. However, things begin to sour when Mr. Huntingdon takes a trip to London and refuses to return until fall.

Mrs. Huntingdon grows increasingly concerned for her son as his father teaches him to drink and act in vulgar ways. Mrs. Huntingdon begins to plan an escape, a way to get her son and go to the continent, away from her husband. However, her husband learns of her plans and puts an end to them. Mrs. Huntingdon begins to search for other ways of escape, finally turning to her brother, Frederick Lawrence. Frederick agrees to help his sister by providing sanctuary in their childhood home, Wildfell Hall, but only if she will promise to give the marriage one last try. Mrs. Huntingdon agrees, but knows she must take her son away when Mr. Huntingdon moves his mistress into the house under the guise of being the governess.

Mr. Markham finishes reading this diary and returns to Mrs. Huntingdon, vowing his undying love. However, Mrs. Huntingdon tells him they cannot be together because she is still married in the eyes of God. Mrs. Huntingdon makes Mr. Markham promise to go away and not contact her for six months. Mr. Markham does, but keeps track of Mrs. Huntingdon's movements through her brother and his good friend, Mr. Lawrence. Unfortunately, Mr. Lawrence will not speak of his sister, but will only share the letters she writes. In these, Mr. Markham learns that Mrs. Huntingdon has returned to her husband to nurse him after a fall from his horse and of his subsequent death.

The Tenant of Wildfell Hall from BookRags. (c)2022 BookRags, Inc. All rights reserved.