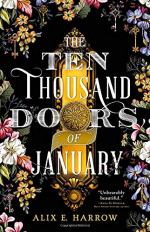 Alix E. Harrow
This Study Guide consists of approximately 62 pages of chapter summaries, quotes, character analysis, themes, and more - everything you need to sharpen your knowledge of The Ten Thousand Doors of January.

This detailed literature summary also contains Quotes and a Free Quiz on The Ten Thousand Doors of January by Alix E. Harrow.

The following version of the novel was used to create this study guide: Harrow, Alix E. The Ten Thousand Doors of January. Redhook, September 10, 2019. Kindle.

The Ten Thousand Doors of January, by Alix E. Harrow, explores the power of words and storytelling as the author imagines a world in which people can access other worlds and cultures through Doors. Julian Scaller, employed by William Locke to send him unique artifacts from these other worlds, noticed that the Doors he found were being closed. Julian feared for his life and for the life of his daughter, January, as he searched for the Door to take him to the world in which his wife had been trapped years prior when the Door was closed as the family was passing through it.

January was seven when she first discovered a Door. She was in a hay field in Kentucky, disappointed when the blue Door standing near the ruins of a cabin took her nowhere but the other side of the hay field. January wrote a story about the Door in her pocket diary and tried the Door again. This time she opened the Door onto a land of salt breezes. She could see a city below her. January did not explore the city because she heard Locke, her guardian, calling for her. Before she left, January picked up a silver coin from the ground of the strange world she had discovered.

Ten years later, January discovered a leather-bound book in an Egyptian chest she had deemed as hers because gifts often appeared in that chest. She thought Locke was leaving her these gifts. However, when she began reading the book, she realized it was not a gift from him. The book had been written by a man named Yule Ian Scholar, a citizen of a world called the Written. It was about Doors and travel from one world to another. January knew that Locke would never have gifted her that sort of book. At about this same time, Locke gave January the news that her father was missing, presumed dead. Despite January’s grief, Locke forced January to attend the party for the New England Archaeological Society of which he was the chairman. As her birthday gift, Locke offered January a membership in the society. January refused because her father, a man who had spent his life collecting items for the Society, had never been offered membership because he was a black man.

Spurred on by the fanciful tale in the leather book, in which the heroine Adelaide “Ade” Larson went out in search of her true love after the Door between them was closed, January decided to go in search of her father. As January was leaving, she told Locke and one of his associates that she believed her father was still alive, that he had found a better world through a Door. Locke was accused of sharing Society secrets with January. January was admitted to an asylum by Locke even though she was not insane. Locke told her it was for her own good.

Theodore Havemeyer visited January at the asylum. He revealed to her that he was a vampire of sorts with the ability to suck the warmth out of a person. Havemeyer wanted to know what Locke had told her about the Society, but the conversation was interrupted when one of the nurses came to give January her bath. January was so afraid of Havemeyer that she decided to escape from the asylum. Because she was not allowed to have a pen or paper, January sharpened the coin she found beyond the Door when she was seven into a point. She used this point to carve words creating a Door into her arm.

By this time, January had read enough of the leather-bound book to realize it had been written by her father. He told the story of how he met January’s mother, Ade, and how they found one another again even after the Door between their worlds was closed. January believed even more strongly that her mother and father were alive in a different world and set about trying to find them.

Because she had the ability to create Doors and open Doors that had been closed, January went to Kentucky where she found her first Door. She had learned through her father’s book that was the Door through which he had entered Ade’s world. January believed she could join her parents through that door, but Locke was waiting for her. He told her the story of how he had founded the Society with the intention of creating a stable, unchanging world by closing the Doors. He asked January to help him, but she refused. Locke shot January twice as she worked to open the Door and go through it. He followed her into the Threshold but was afraid to go further and was lost there.

January was reunited with both her mother and father beyond that Door. She dedicated her life to returning the artifacts Locke had stolen from other worlds and opening the Doors he closed.

More summaries and resources for teaching or studying The Ten Thousand Doors of January.