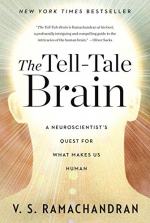 V. S. Ramachandran
This Study Guide consists of approximately 29 pages of chapter summaries, quotes, character analysis, themes, and more - everything you need to sharpen your knowledge of The Tell-Tale Brain.

The following version of this book was used to create this study guide: Ramachandran, V.S. The Tell-Tale Brain. W.W. Norton and Company, 2011. 1st ed.

The field of neuroscience has flourished since the 1990s, presenting us with a world of new information that can help us better understand the nature of the human mind. In his latest book, The Tell-Tail Brain, neuroscientist and author V.S. Ramachandran uses his experience in studying these rapid advancements both to present confirmed discoveries and to speculate about where the field might continue to go and what it might find in the future.

Much of the information presented in The Tell-Tale Brain was discovered by scientists who study people with damaged or genetically unique brains. This includes people who have suffered strokes and recovered most but not all functions, people with phantom limbs or people with synesthesia. Often, studying these problems makes it possible to perform a sort of reverse-engineering, allowing researchers to extrapolate information about the general workings of the part of the brain or neural pathway in which a disease or injury has its effect.

Ramachandran applies the specific insights gained from the studies of unusual problems to his general knowledge of the human brain to explain in-depth what goes wrong in these cases, and then relates that back to what happens in a normally functioning brain. He uses specific case studies to examine basic but poorly understood elements of the human experience like brain plasticity, visual perception, social structures, autism, language, aesthetics and introspection. At the same time, he ponders questions of morality, human uniqueness and the fine line between what connects us to other animals and what separates us from them.

Much of the information presented in The Tell-Tale Brain can be viewed through the lens of human evolution. Humans are unique because of our mental faculties, but these unique mental faculties all result from physical structures that can only have evolved from physical structures that were present in our early ancestors. Human brains evolved in small, gradual steps that resulted in astonishing changes.

The human brain is made up of circuits, which are in turn made up of cells called neurons. Ramachadran takes the reader on a tour of these circuits and the regions of the brain they connect and pass information through. He explains how these circuits and structures work, and describes in detail how seemingly small changes can have drastic effects on things most people take for granted, like the ability to feel pain, put together coherent sentences, or even recognize a loved one.

Ramachandran addresses The Tell-Tail Brain directly to the reader, speaking in second person and presenting information in a style that is half conversation, half lecture, even occasionally asking the reader questions. He writes in terms that are generally accessible to the layperson and assumes curiosity, rather than prior understanding.

Ramachandran starts The Tell-Tail Brain with a preface in which he borders on the philosophical. He discusses the concept of scientific progress and the nature of discovery, introducing what he calls “the magic of the scientific method.” He tells the reader what drove him to study neuroscience and why he wrote this book.

This is followed by introduction that serves as a crash-course in neuro-anatomy, explaining to the reader the fundamental geography of the brain in terms of lobes, hemispheres and connections. Ramchandran then goes into greater detail about the specific functions of the parts of the brain he considers most relevant to his work. This section also introduces a concept that Ramachandran will come back to in each following chapter - the relationship between structure and function.

Chapter 1 looks at a strange phenomenon known as phantom limbs, in which patients feel pain in a body part that has been amputated. Ramachandran discusses how studying phantom limbs led him to conclude that sensations felt throughout the body could be mapped out to specific locations within the facial nerves. He then describes how phantom limb pain can be relieved through the innovative use of mirrors - cementing the idea that perception is reality. Chapter 2 discusses human visual perception in-depth, explaining how both the structures of the eye and of the visual pathways within the brain create what we see. Chapter 3 looks at a synesthesia, a rare condition in which a single stimuli activates two senses at the same time, causing people to say that they can see sounds or taste certain textures just by looking at them.

In Chapter 4, Ramachandran introduces a type of cell known as mirror neurons, brain cells present in primates that allow them to mimic the motions they see others perform. Ramachandran suggests that human mirror neurons have evolved to be unique in that they also allow us to interpret the intentions behind the actions we see others taking, and are therefore responsible for most of our social interactions. In Chapter 5, he describes autism, and suggests that many of the social issues present in autism may be due to a failure or disconnect in the motor neuron system.

In Chapter 6, Ramachandran explains how humans evolved to perceive and create language using structures that are not physically much different from those present in apes. He introduces the concept of protolanguage, suggesting that language may have evolved in steps not dissimilar to the steps in which the brain regions that support it evolve. In Chapter 7, he introduces a scientific basis for the study of aesthetics and establishes what he considers the nine rules of aesthetics. In Chapter 8, Ramachandran takes a more in-depth look at some of these rules and delves into greater speculation than previously in establishing a neurological basis for the creation of art. Finally, Chapter 9 makes an argument for a neurological basis for a sense of self based on a series of case studies of specific conditions, including one that makes the sufferer believe that they are dead, and therefore have no self.

More summaries and resources for teaching or studying The Tell-Tale Brain.