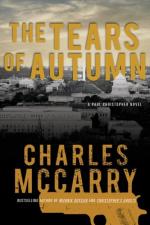 Charles McCarry
This Study Guide consists of approximately 63 pages of chapter summaries, quotes, character analysis, themes, and more - everything you need to sharpen your knowledge of The Tears of Autumn.

The Tears of Autumn Summary & Study Guide includes comprehensive information and analysis to help you understand the book. This study guide contains the following sections:

This detailed literature summary also contains Topics for Discussion and a Free Quiz on The Tears of Autumn by Charles McCarry.

The Tears of Autumn circles the globe following Agent Paul Christopher's quest for proof that the South Vietnamese are behind the assassination of President John F. Kennedy as revenge for Kennedy backing the 1963 coup d'etat.

Agent Paul Christopher learns from an informant, Luong, about a meeting between a North Vietnamese official and an unidentified woman. Paul is in Paris with his case worker, Tom Webster, White House aide Dennis Foley, and Peggy McKinney when word comes of a coup d'etat in Saigon. Paul flies to Rome to visit his girlfriend Molly, and then to Washington, DC, to meet old friend and Agency high-up, David Patchen. Paul has met in the Congo with Alphonse Nsango when word comes of John F. Kennedy's assassination. Back in Rome, Paul learns of Soviet paranoia because assassin Lee Harvey Oswald had once defected to the USSR and hears from Saigon acquaintance Nguyên Kim of the Ngos' determination to "spit out of their graves." Within ten days, Paul forms a hypothesis.

When Foley orders Paul's investigation ended, Paul resigns. In Geneva he withdraws a large amount of money deposited in his name, drives to Paris, where Kim tells him about Vietnamese family ties, sells him names of contacts, and promises that "Lê Thu" will "open doors." In Saigon, Paul visits the Truong toc, learns from Wolkowicz's associate about Oswald's trip to Mexico City, meets an enigmatic Ngo relative, Fr. Jean-Baptiste Ho, hears how heroin will ensnare young U.S. troops arriving in-county, and returns to Saigon to find Luong murdered. After another interview with the Truong toc, Paul is shot at and nearly car bombed, arrested, and told to leave the country. After attending Luong's wake, arranging horoscopes from Yu Lung, and inadvertently killing Luong's killers, Paul catches his plane.

Back in Rome, Paul learns from Soviet defector Gherman Klimenko about Frankie Pigeon, arranges use of an Agency villa, sends Molly with Websters to Switzerland, obtains translations of the Chinese horoscopes, runs into Kim, who renews Truong toc' death threat against Molly, obtains evidence in Zürich confirming Klimenko's story, hires Stavros Glavanis and Jan Eycken to kidnap Pigeon, and personally extracts Pigeon's confession, all of which he mails to himself in Washington. Back in the Congo, Paul learning about the hiring of Lee Harvey Oswald from a Cuban, Manuel Ruiz, prepares a final report, and offers it to the government. Foley's new White House superior, J.D. Turnbull, believes it, but burns it as a political expediency. Paul is reunited with Molly in Zermatt for New Year's Eve and accepts that she will not leave him, even at the risk of her life.

More summaries and resources for teaching or studying The Tears of Autumn.

The Tears of Autumn from BookRags. (c)2022 BookRags, Inc. All rights reserved.