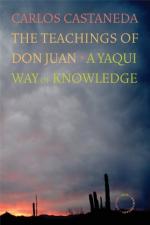 The Teachings of Don Juan: A Yaqui Way of Knowledge Summary & Study Guide

Carlos Castaneda
This Study Guide consists of approximately 44 pages of chapter summaries, quotes, character analysis, themes, and more - everything you need to sharpen your knowledge of The Teachings of Don Juan.

The Teachings of Don Juan: A Yaqui Way of Knowledge Summary & Study Guide includes comprehensive information and analysis to help you understand the book. This study guide contains the following sections:

This detailed literature summary also contains Topics for Discussion and a Free Quiz on The Teachings of Don Juan: A Yaqui Way of Knowledge by Carlos Castaneda.

The Teachings of Don Juan: A Yaqui Way of Knowledge describes the effects of three hallucinogenic drugs taken by a graduate student under the supervision of a Yaqui Indian shaman, first as a narrative of the experiences and then as a systematic, scholarly analysis.

Seeking information about peyote, Carlos Castaneda meets an expert Yaqui shaman, Don Juan Matus. After a year of growing friendship and a test that shows he has the backbone to meet "Mescalito", the anthropomorphism of the hallucinations caused by ingesting peyote buttons, face-to-face, Castaneda begins a "long and arduous" apprenticeship. During his first peyote experience, Castaneda convulses and feels suffocated, but cavorts with a glowing black dog, whom Matus assures him is Mescalito in a rare display of playfulness. Matus advises him to concentrate on his calling, rather than on his fear, and to see the marvels around him.

Gradually, following his benefactor's methodology, Matus introduces Castaneda to allies. They are neither guardians nor spirits, but aids in doing great things. Precise steps are needed to acquire allies. Although he dislikes his benefactor's ally, devil's weed, Matus introduces him to it first, showing how to pick and prepare the four "heads," and gives him a potion to drink. Despite its painful side effects, Matus is convinced that the Datura ally likes him. Matus next introduces his own "most marvelous ally," the "smoke of diviners."

Castaneda learns how to cultivate Datura and how to prepare the smoke mixture. Matus tells him that learning is a hardship that all can undertake, but that few achieve. To become a "man of knowledge" one must defeat four "natural enemies:" fear, clarity of mind, power, and old age. The outcome cannot be foreseen, and the state lasts only an instant after defeating the fourth. Matus teaches about Datura's "second portion," where real learning begins. It allows one to soar through the air. Castaneda experiences it twice, carrying out an elaborate ritual involving lizards, and the second time feels at home, soaring in serene darkness. He rates the night "truly magnificent," and does not think the headache will impede him from trying the weed again.

Castaneda next smokes for the first time and is terrified by the sensations. Solid surfaces feel spongy and terrifying. He balks at trying it again, declaring it is like losing one's mind. Castaneda's final encounter with Mescalito comes in a four-day peyote ceremony for peyoteros and their apprentices. Mescalito teaches him a song (which he memorizes), shows him talking intimately to his father, and reveals a secret name for Castaneda's use only. Matus declares this means Mescalito approves of him and has given him a clear lesson about the only one path and one "world of happiness" for him.

Castaneda performs the lizard ritual on his own, absentmindedly anointing his forehead, which is forbidden. Datura, however, spares his life. He still prefers devil's weed to smoke, because smoke is so frightening. Matus says that he is free to choose his path, but should realize that both blind: smoke by fear and devil's weed by ambition. He smokes again and feels himself turn into a crow in a process that is difficult, but not painful. The next time, it takes Matus three days to bring him back. He learns that his destiny, one day, is to die and fully become a crow.

Castaneda experiences dissociation, diagnoses a "loss of soul" and true bewitching. Matus prescribes specific bodily positions for Castaneda to perform on his "beneficial spot" while he finds the culprit and tries to get his soul back. During a horrendous night, a diablera imitates Matus, trying to lure him off his spot. In the morning, Matus informs him that, had he not learned all he has, he would not have survived. When Castaneda cannot shake profound distress, Matus declares this is common among those who lack "unbending intent." Thereafter, Castaneda refrains from seeking lessons, and months later, struggles to organize his field notes to show the "internal cohesion" of Matus' methodology.

More summaries and resources for teaching or studying The Teachings of Don Juan: A Yaqui Way of Knowledge.

The Teachings of Don Juan: A Yaqui Way of Knowledge from BookRags. (c)2021 BookRags, Inc. All rights reserved.