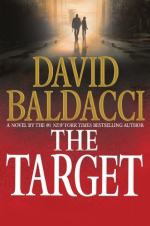 David Baldacci
This Study Guide consists of approximately 35 pages of chapter summaries, quotes, character analysis, themes, and more - everything you need to sharpen your knowledge of The Target.

The Target Summary & Study Guide includes comprehensive information and analysis to help you understand the book. This study guide contains the following sections:

This detailed literature summary also contains Quotes and a Free Quiz on The Target by David Baldacci.

Will Robie is called by the new Deputy Director of the CIA, Amanda Marks, and ordered to make himself available for vetting for a new mission. This mission is never explained to Robie, or to Jessica Reel, his unofficial partner. However, based on the fact that Reel murdered the former DD and an analyst in the employ of the CIA before their last, heroic mission, Reel and Robie both feel as though they have become a target of the head of the CIA, Evan Tucker. For this reason, they do not expect to survive the vetting.

At the Burner Box, the CIA’s North Carolina training location, both Robie and Reel are pushed to their limits by Marks as she forces them to prove their ability to continue as CIA agents. After more than a week of hard exercise, dangerous training, and tests of their endurance, Robie and Reel are put through the torture technique known as waterboarding. They are told that the torture will end if they will sign confessions. Reel’s confession is an admission that she murdered two CIA employees while Robie’s is to confess to treason by aiding Reel. They both refuse. A visit from Tucker informs them that this was only a test to see how they would hold up under torture by the enemy, but Tucker tells the CIA agent who conducted the torture that he had wanted the confessions to hold against the two agents.

Robie and Reel’s experience gains them respect and support from Amanda Marks who lightens their continuing training and works out with them. At the same time, the mission Tucker had planned to send Robie and Reel to perform shatters when an ally is killed. Instead, Tucker sends the two agents to kill an ally who might now be a liability. However, when Robie and Reel arrive to kill the North Korean general, he asks them to protect his family before killing himself. When the president receives word of the general’s final statement, he asks Robie and Reel to go to North Korea and rescue the general’s two adopted children from an internment camp.

Robie and Reel successfully rescue the general’s children, but the act has angered the North Korean government. The North Korean government sends an assassin to kill the president’s wife and two children. Robie and Reel, who caught the attention of the president’s ten year old son, are invited to go on vacation with the First Lady and her children in Nantucket. Unbeknownst to them, this is where the assassins intend to strike.

On Halloween night, the assassins attack the First family as they enter the courthouse on Nantucket to lead a Halloween parade. Robie and Reel manage to get the family into a secure room, but they are soon overtaken by the assassins when they use flash bombs to disorient them. However, as they confront the assassins, one of the their own, a woman from the internment camps called Chung-Cha, turns on her own allies in hopes of saving the life of a young child she adopted from the same camp. Chung-Cha is killed by an overzealous deputy, but her child is found and rescued. Reel and Robie arrange for the child, Min, to live with Robie’s friend, Julie, and her guardian.

More summaries and resources for teaching or studying The Target.

The Target from BookRags. (c)2022 BookRags, Inc. All rights reserved.