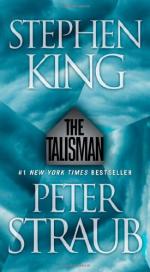 The Talisman Summary & Study Guide includes comprehensive information and analysis to help you understand the book. This study guide contains the following sections:

This detailed literature summary also contains Topics for Discussion on The Talisman by Stephen King.

'The Talisman' by Stephen King and Peter Straub was one of the first of a series of collaborations by the 'masters' of the Horror genre through the eighties, nineties, and beyond. Written as a collaborative piece, it shares many of the associations and thematic similarities with a lot of the works of these two authors, developing ideas that each have implanted within their stories such as Corruption, Magic, and Childhood Innocence.

The Talisman follows the story of Jack Sawyer as he accompanies his mother Lily Kavanaugh-Sawyer to a dreary and depressing rain-drenched resort in New England. Lily Sawyer is dying of cancer. Jack Sawyer soon encounters the mysterious Speedy Parker a local handyman who seems to know the cure for his mother and for many of the strange woes that are befalling Jack. He reveals to Jack that there is in fact another world alongside our own called the Territories which his own father knew about, and which he must travel through to get to the other side of America if he is to save his mother.

The journey that the young Jack Sawyer takes is not only a re-enactment of the Heroes Quest, but also a psychological journey where he has to encounter his deepest fears, and learn the value of friendship. The challenges and dangers that befall him not only introduce him to the magic and wonder of the Territories, but also to such spiritual illnesses as hopelessness, incarceration, apathy.

In one sense, a road trip across America, Jack Sawyer meets a friendly werewolf named 'Wolf' and is pursued by Morgan Sloat - his father's old business partner who sees in Jack and the Territories an opportunity to gain control over the whole world.