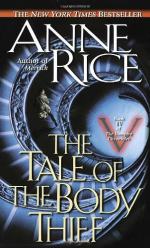 The Tale of the Body Thief Summary & Study Guide

Anne Rice
This Study Guide consists of approximately 28 pages of chapter summaries, quotes, character analysis, themes, and more - everything you need to sharpen your knowledge of The Tale of the Body Thief.

The Tale of the Body Thief Summary & Study Guide Description

The Tale of the Body Thief Summary & Study Guide includes comprehensive information and analysis to help you understand the book. This study guide contains the following sections:

This detailed literature summary also contains Topics for Discussion on The Tale of the Body Thief by Anne Rice.

"The Tale of the Body Thief" is book four of the Vampire Chronicles by Anne Rice. In this book, the Vampire Lestat tells how he meets Raglan James, a self-described body thief. Raglan James approaches Lestat with an offer that would allow Lestat to enter a mortal body, to become mortal again for the first time in hundreds of years. Lestat jumps at the chance even though he suspects that James is not an honest man. As a mortal, Lestat discovers how vulnerable the human body truly is when he becomes deathly ill. When James fails to return at the appointed time to reverse the body exchange, Lestat turns to his vampire friends for help. However, Louis and the others refuse to help Lestat. Lestat turns to mortal man, David Talbot, for help. With David's help, Lestat gets his own body back along with a new appreciation of what it means to be a vampire. "The Tale of the Body Thief" is a story of self-discovery and friendship that continues Anne Rice's unique vision of a magical world filled with unique characters.

Lestat has been a vampire for more than two hundred years. Lestat is very powerful, possessing abilities that other, newer vampires, do not possess. However, Lestat has become overwhelmed with the guilt of killing humans for his own sustenance. For this reason, Lestat decides to kill himself. Lestat goes to the Gobi Desert to lie in the sun. This would normally kill a vampire, but Lestat's powers are so strong that two days in the sun does not kill him, but leaves him terribly burned. Lestat makes his way to the home of his friend, David Talbot, where he rests until his burns become more tolerable.

A human man has somehow discovered who Lestat is and has begun to follow him, leaving packages for him at random places. Lestat soon realizes that each package, from short stories to movies, has the same theme. Lestat becomes curious about this human and agrees to meet him. The man, Raglan James, tells Lestat that he has the ability to exchange bodies with other people. James explains that the soul actually leaves the body and his soul can take its place. James then tells Lestat that he wants to exchange bodies with him, to have the experience of living inside a powerful vampire's body. Lestat forces James into giving him time to think about the exchange, but in reality Lestat only wants time to arrange the financial exchange James has insisted on.

James and Lestat exchange bodies. Lestat is now a mortal human with a strong, young body. Lestat immediately finds himself in trouble, however, as James has stolen all the money Lestat has hidden for his own use during the exchange. Then, as Lestat becomes aware that his new mortal body is becoming ill, he discovers that James has decided not to return at the appointed time to return Lestat to his true body. Lestat falls deathly ill and is hospitalized. While in the hospital, Lestat meets a nun who is a volunteer nurse at the facility. Lestat tells this woman the truth about his situation. The nun takes him into her own home to care for him and to protect him from the consequences of his rantings.

Lestat falls for the nun, coming as close to love as he has ever been with a human woman. However, the urge to return to his former existence begins to overtake him and he finds himself rushing back to New Orleans to seek the assistance of his vampire friends. Louis, one of his closest friends, refuses to help him. Lestat finds himself alone and in desperate need of help. Finally he turns to David Talbot, a human friend and Superior General of the Talamasca.

David and Lestat track James to a cruise ship. On the ship, they confront James and Lestat manages to get his body back. However, when Lestat leaves the ship and reconnects with David, he discovers that James has taken over his body. Lestat, in a fit of anger, kills David's body. Then Lestat finds David in Raglan James' and turns him into a vampire against his will. David is angry at first, but later forgives Lestat as he embraces his powerful new body.

More summaries and resources for teaching or studying The Tale of the Body Thief.

The Tale of the Body Thief from BookRags. (c)2022 BookRags, Inc. All rights reserved.