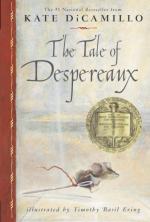 The Tale of Despereaux: Being the Story of a Mouse, a Princess, Some... - Book the Third: Chapters 24-33 Summary & Analysis

Kate DiCamillo
This Study Guide consists of approximately 21 pages of chapter summaries, quotes, character analysis, themes, and more - everything you need to sharpen your knowledge of The Tale of Despereaux.

Chapter 24. When Miggery Sow is six, her mother died. A short time later, her father sells her for a hen, a red tablecloth, and a handful of cigarettes.

Chapter 25. Miggery Sow is left to live with a man who forces her to call him uncle. Uncle often hits Miggery Sow on the ear for not doing her chores properly. For this reason, Miggery begins to lose her hearing and her ears begin to resemble cauliflower.

Chapter 26. On Mig's seventh birthday, she sees the king, queen, and princess pass by Uncle's house. This sight gives Mig hope for the first time in her life.

Chapter 27. Mig tells Uncle she would like to be a princess one day. Uncle hits her for being fanciful.

Chapter 28. Shortly after the queen's death, soldiers come to Uncle's house to collect...

(read more from the Book the Third: Chapters 24-33 Summary)

More summaries and resources for teaching or studying The Tale of Despereaux: Being the Story of a Mouse, a Princess, Some....

The Tale of Despereaux: Being the Story of a Mouse, a Princess, Some... from BookRags. (c)2023 BookRags, Inc. All rights reserved.