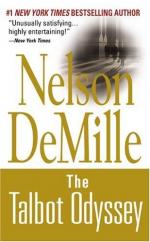 Nelson Demille
This Study Guide consists of approximately 33 pages of chapter summaries, quotes, character analysis, themes, and more - everything you need to sharpen your knowledge of The Talbot Odyssey.

This detailed literature summary also contains Topics for Discussion and a Free Quiz on The Talbot Odyssey by Nelson Demille.

A group of lawyers and retired spies, including George Van Dorn, Patrick O'Brien, Tom Grenville, and Peter Thorpe, hears rumors of a Russian plot to take down the United States. Katherine Kimberly is another one of these lawyers, the daughter of former spy Henry Kimberly who was killed in action during World War Two. An English Colonel comes to her one day and gives her a letter that claims that a diary has been found containing new information on Talbot. Talbot is a double agent placed high within the intelligence community of the United States who has betrayed his country to the Russians since World War Two and has never been caught. The Colonel never arrives at the designated meeting location, and the diary is never found.

Kimberly asks a recently retired police officer named Tony Abrams to help her group of amateur spies uncover the plot and in the process solve the long-standing mystery of the identity of Talbot. Tony Abrams agrees, and begins to investigate some of the more suspicious characters in the group. Peter Thorpe, Katherine's boyfriend, appears at a function with blood on his cuff, and Abrams knows that Thorpe is up to no good. He cannot prove anything, however, so keeps his suspicion to himself.

Abrams is seduced by Claudia, a foreign national working for the law firm, and is then attacked by a group of masked men who try to throw him off the roof where the tryst takes place. Abrams suspects that Thorpe has something to do with the attack, and asks Katherine why she trusts Thorpe during a morning trip to the firm's offices, where they discover the recently murdered Arnold Brin, keeper of the files on spies. He has written the call number to the book, "The Odyssey," as his final clue. Patrick O'Brien, Kimberly's boss at the law firm, encourages Abrams to think like a spy and remember that nothing is at it seems. Later that night, Thorpe pushes O'Brien out of an airplane and his body is never recovered.

Thorpe is in fact working for the Russians, and he kidnaps Nicholas West, a CIA information officer, in order to gain information about Talbot so that he can impress his Soviet handler. West resists Thorpe's interrogation and kills himself using cyanide. Thorpe joins Abrams and Kimberly on a morning jog, at which point he attempts to kidnap Katherine Kimberly and kill Tony Abrams. With the help of hired gun Marc Pembroke, Abrams and Kimberly escape.

That night, at a fourth of July party on Long Island, Abrams infiltrates the Russian embassy's weekend house and discovers that they have fortified the home to withstand an electromagnetic pulse that would permanently disable the electronics systems in the United States. He also learns the identity of Talbot and Odysseus when he accidentally comes face-to-face with Henry Kimberly, Katherine's allegedly dead father. He returns to George Van Dorn's estate next door to the Russian house and fills in the rest of the group. They immediately plan a multi-faceted counter attack. Van Dorn warns the group that there are, in fact, three Talbots. Henry Kimberly is only one of them, and the other two must be nearby.

The Russians count down to the detonation in the sky that will signal the EMP, even as a group of armchair spies and semi-retired soldiers sneaks into their mansion. Marc Pembroke kills Androv, the KGB station chief in New York, and spots Patrick O'Brien escaping with the other Russian soldiers. The identity of the second Talbot is known. Patrick O'Brien joins Henry Kimberly, and the two men discuss the identity of the third Talbot, James Allerton, Peter Thorpe's father and close advisor to the President. O'Brien shoots Kimberly so that he can have more power, and then Abrams shoots O'Brien in an act of mercy. Peter Thorpe dies of a stab wound inflicted by another American armchair spy. Katherine Kimberly, Tony Abrams, and their colleagues seize the Russian radio and broadcast the plot to the international intelligence community. The detonation time passes, and no EMP erupts. The team has saved the United States from a total Soviet takeover.

More summaries and resources for teaching or studying The Talbot Odyssey.