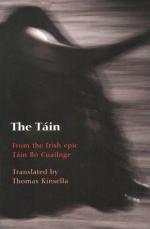 Get The Tain from Amazon.com
View the Study Pack
View the Lesson Plans
Study Guide
Order our The Tain Study Guide

China Miéville and Thomas Kinsella
This Study Guide consists of approximately 42 pages of chapter summaries, quotes, character analysis, themes, and more - everything you need to sharpen your knowledge of The Tain.

The Tain Summary & Study Guide includes comprehensive information and analysis to help you understand the book. This study guide contains the following sections:

This detailed literature summary also contains Topics for Discussion and a Free Quiz on The Tain by China Miéville and Thomas Kinsella.

The Tain or "Tain Bo Cuailnge," translated as "The Cattle Raid of Cuailnge," is considered the nearest equivalent Ireland has to a national epic. The central events of the story revolve around the theft of a prized and legendary cow (the titular Donn Cuailnge) by King Ailill and his Queen, Medb, and the subsequent great battle to avenge this theft, almost singlehandedly waged by Irish hero Cuchulainn.

This text, patched together from a variety of ancient sources, first tells the tale of the birth of Conchobor, who would rise to usurp the throne of an Irish land called Ulster. The Ulster people, cursed by a woman, would unfortunately be wracked by great periodic pains, similar to labor pains, called "The Pangs of Ulster," that immobilize them.

Beyond Conchobor, the more important hero to Tain, however, is Cuchulainn, whose birth story is next related. In a magical series of events, Cuchulainn has a sort of triple-birth (and thus a triple lineage), born both of men and of an ancient, semi-divine race of beings called the side. Cuchulainn has a remarkable boyhood, accomplishing impossible feats and achieving a god-like warrior prowess, similar to heroes in other ancient epics.

This is all lead-up to the actual Tain, which begins when King Ailill and Queen Medb compare their wealth, with Medb discovering she lacks a prize bull as the only difference between their stores of wealth. Medb and Ailill then amass a great army, from the four provinces of Ireland, to steal Donn Cuailnge, the legendary bull, from the people of Ulster.

Unfortunately for the Ulstermen, they are undergoing their curse and are immobilized with the pangs. The only warrior among them unaffected by the curse is the hero Cuchulainn. Most of the narrative has Cuchulainn waging essentially a one-man war against the Irish army, killing many from afar with his slingshot, and then one a day in a duel scenario he agrees to, all in an effort to stall the army in time for Ulster to wake from its curse and take up arms.

Cuchulainn performs mighty deeds and kills many, many members of the army, though even he suffers many wounds. His largest struggle comes in his duel with the warrior Ferdia, who is his foster-brother and almost his match in arms. After a furious and legendary three days of non-stop fighting, Cuchulainn resorts to using his legendary barbed spear, the gae bolga, to kill Ferdia, who he then laments in classical epic fashion.

The Irish army has lost its hero, and Ulster has awoken, spelling doom for the Irish. King Conchobor rallies the men of Ulster, and as wounded Cuchulainn watches from the sidelines, the Irish army is decimated. Peace is then returned to the land.

More summaries and resources for teaching or studying The Tain.

The Tain from BookRags. (c)2022 BookRags, Inc. All rights reserved.