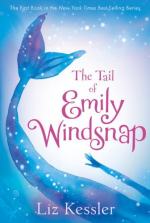 Liz Kessler
This Study Guide consists of approximately 63 pages of chapter summaries, quotes, character analysis, themes, and more - everything you need to sharpen your knowledge of The Tail of Emily Windsnap.

The Tail of Emily Windsnap Summary & Study Guide includes comprehensive information and analysis to help you understand the book. This study guide contains the following sections:

This detailed literature summary also contains Quotes and a Free Quiz on The Tail of Emily Windsnap by Liz Kessler.

The Tail of Emily Windsnap by Liz Kessler is a story about a 12-year-old girl who lives with her mother on a boat called the King of the Sea. Emily's life is fairly normal until she finally convinces her mother to allow her to take swimming lessons when she begins secondary school. Until now, her mother's fear of the water had prevented Emily from learning to swim, despite repeated requests. Emily's first lesson changes her life, beginning with the appearance of a tail where her legs should be when she first immerses herself in the pool. Shocked, and afraid, the swimming teacher helps her out of the water, but no one notices her legs joined and scaled. The first Wednesday of Year Seven will be one she remembers forever.

Although no one sees her tail appear, or thankfully disappear when she gets out of the water again, Emily is still too afraid to attend another class, especially after sneaking out that night and repeating the performance off the pier where King is docked. Despite wanting out of the swimming classes, Emily loves the water. As soon as she enters the water and her tail appears, she becomes graceful and feels tremendous power and control.

Emily begins sneaking out whenever she can, enjoying every minute in the water. She ventures further from home each time, and on her second time out she meets another mermaid who introduces herself as Shona once she is over the shock of seeing her. Shona is the first one to tell Emily about her father and correct the lie she'd been told her whole life. Emily's father hadn't deserted them. He'd been arrested and incarcerated for falling in love with a human - something strictly forbidden by Neptune.

Emily decides to find her father, and with Shona's help she manages to break her way through the Great Mermer Reef to the other side where the prison is located. Although she manages to find him, freeing her father is not as easy as she'd hoped it would be. Instead, she and Shona along with her mother and babysitter Millie are arrested and brought before Neptune to answer charges. Neptune holds court, in complete control and after deliberating decides that Emily is right. Love should not be punished by incarceration. Instead, Neptune offers them the opportunity to live like a family, although they have to do it on an island in a secure location for the rest of their lives.

Shona is given a choice of having her memories erased like Millie or joining Emily and her family provided her parents approve. Emily goes back to school one more time and with Mr. Beeston's help, she is able to reveal herself for one shining moment before he erases those memories, and Emily joins her family again to live happily ever after.

More summaries and resources for teaching or studying The Tail of Emily Windsnap.

The Tail of Emily Windsnap from BookRags. (c)2022 BookRags, Inc. All rights reserved.