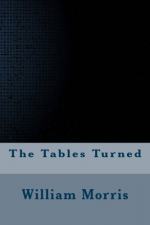 William Morris
This Study Guide consists of approximately 15 pages of chapter summaries, quotes, character analysis, themes, and more - everything you need to sharpen your knowledge of The Tables Turned.

This detailed literature summary also contains Quotes and a Free Quiz on The Tables Turned (Poem) by William Morris.

The version of the poem used to create this study guide appears in: Wordsworth, William. "The Tables Turned." The Poetry Foundation, https://www.poetryfoundation.org/poems/45557/the-tables-turned. Accessed 26 July 2018. Parenthetical citations within the guide refer to the lines of the poem from which the quotations are taken.

“The Tables Turned” is a poem written by the English Romantic writer William Wordsworth. The piece was originally published in 1798 in Lyrical Ballads, a collection of poems Wordsworth co-compiled with his contemporary Samuel Taylor Coleridge. The poem was composed during the transition from the Age of Enlightenment to the Romantic Era in literature, and is something of a reaction by Wordsworth to the ideals of the Enlightenment.

The poem begins with its speaker beckoning the reader to set aside their books and go out into nature instead. Books, the speaker says, are endless and unfulfilling work. Meanwhile, there is so much beauty to be found in nature, from the sunlight shining above the mountaintops to the sweet music of birdsong. The speaker urges the reader to allow nature to be their teacher, for it possesses a wealth of wisdom that the knowledge found in books can barely even approach. Furthermore, they condemn the crude ways in which humans pursue academic knowledge, destroying and manipulating nature in order to learn from it. In the poem’s final lines, the speaker petitions the reader once more to come forth into nature with an open heart and receive its wisdom.

More summaries and resources for teaching or studying The Tables Turned (Poem).