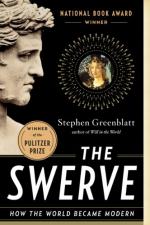 Why did the sight of the traveling Poggio Bracciolini appear unusual to the people of the German countryside? Why did he not divulge his purpose for traveling through German towns and villages?

What talent did Poggio have? Why was he seeking out old manuscripts that had been lost over the years and where did he hope to find them?

What is Epicurean philosophy? Who inspired what became known as the Humanities and what were the tenets of this movement?

What tasks were fulfilled by scribes and copyists? Why were scribes needed and what role did they play in the papacy and in society in general?

Why did the scribes have to learn the papyrus making process? What other materials did they have at their disposal for their transcription work? Why were some works reused and written over with new writing?

What was the impact of the Emperor...

The Swerve from BookRags. (c)2022 BookRags, Inc. All rights reserved.