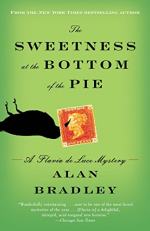 The Sweetness at the Bottom of the Pie: A Flavia De Luce Mystery Summary & Study Guide

The Sweetness at the Bottom of the Pie: A Flavia De Luce Mystery Summary & Study Guide Description

The Sweetness at the Bottom of the Pie: A Flavia De Luce Mystery Summary & Study Guide includes comprehensive information and analysis to help you understand the book. This study guide contains the following sections:

This detailed literature summary also contains Quotes and a Free Quiz on The Sweetness at the Bottom of the Pie: A Flavia De Luce Mystery by Alan Bradley.

The following version of this book was used to create this study guide: Bradley, Alan. The Sweetness at the Bottom of the Pie. Bantam, 2010. Kindle Edition.

As the narrative opens, Flavia, the narrative’s eleven-year old protagonist and narrator, is trying to untie herself and escape from a closet in which Ophelia and Daphne (her sisters) have locked her. After escaping, a more challenging and deadly task faces Flavia when several strange events occur at her family's home. Someone leaves a dead bird with a stamp pinned on it. The sight upsets Flavia's father so much that she fears that he is going to have a heart attack and die.

Later, she overhears her father in a heated conversation with a stranger. When Dogger, her father's right hand man around the house, catches Flavia eavesdropping she is sent away from her home. However, while eavesdropping, she has heard her father tell the stranger that they murdered a man named Mr. Twining. Also, Flavia hears Dogger tell someone to get away from him even though he appears to be alone. Finally, Flavia discovers a dying man in the house's cucumber patch. The man says one word to her before he dies. Flavia decides to tell Dogger, instead of her father, about the dead man in the cucumber patch. Then, they call the police.

The police arrive. Inspector Hewitt, the lead detective on the case, begins his investigation. At the same time, Flavia begins her own investigation to learn more about the man her father said he and the stranger murdered and to discover the identity of the dead man in the cucumber patch. Her research leads her to pieces of information about her father's past. Mr. Twining was a Latin teacher at the boarding school her father attended as a child. According to newspaper accounts, he committed suicide. His niece, Miss Mountjoy says, however, that he was murdered. She blames a group of boys, one of whom is Flavia's father, for her uncle's death. The boys had connived to get Mr.Twining to arrange the showing of a rare stamp that disappeared during the evening. The dead man, who also left the bird with the stamp on it, is Horace Bonepenny. He is one of the bad boys Miss Mountjoy references.

Finally, Flavia gets the truth about her father's relationships with Mr. Twining, Horace Bonepenny, and Horace's friend (Bob Stanley) when the police arrest her father and Inspector Hewitt allows her to talk to her father in his prison cell. The Colonel tells Flavia how he had discovered a love of and talent for magic when he was in boarding school. Mr. Twining was the head of the magic club. Horace attended the same school. Flavia's father and Horace became friends there. They performed a successful magic trick together. However, as Horace’s magic abilities grew, his character changed. Flavia's father realized that he did not like the changed version of Horace. The two boys drifted apart. The attendance to the magic shows diminished, and Twining decided to begin a Philatelic Society. Then, Horace and the boys convinced him to arrange a showing of a valuable stamp collection. He did so. During the showing, Horace perfumed a magic trick. The stamp disappeared, and no one could find it. Later, Flavia's father realized that the illusion had placed the stamp on his sleeve so that he would have been implicated in the theft of the stamp if he had been searched. Horace, however, took the stamp with him. He ran into him and his partner Bob Stanley in London at a stamp collector's show. Someone stole a rare stamp there, and Flavia’s father knew that the thieves were Horace and Bob. Horace later came to the house to get Flavia's father to buy the stamps. Her father refused. At this point, he tells Flavia that their family has no money. He says that he did not kill Bonepenny. Flavia believes that he fears that Dogger did to protect him.

After receiving this information, Flavia goes to her father's old school. She goes up the tower and finds old clothes under one of the boards. She takes them with her and later gives them to Inspector Hewitt because she believes that somebody, possibly Horace, pushed Mr. Twining.

While all of this has been going on, a man named Frank Pemberton has appeared. He says he is a writer and is interested in learning more about Flavia’s family’s house. In reality, he is Horace’s friend, Bob Stanley. Soon after realizing this fact, Flavia finds herself alone with Pemberton. He knows that she has the stamps he wants and that he is Bob Stanley. He takes her to a pit. She tells him the stamps are in her house even though she has them with her. While Stanley goes to look for them, she attempts an unsuccessful escape. He returns after discovering that the stamps are not in the house and is threatening to kill Flavia when Dogger and Ophelia arrive in Flavia and Ophelia’s mother's old car and save her. The police arrest Stanley. Flavia presents the valuable stamp to her father who tells her to return it to its rightful owner, King George. She sends King George a letter with the stamp in it. At the end of the narrative, she receives a letter from King George thanking her.

The Sweetness at the Bottom of the Pie: A Flavia De Luce Mystery from BookRags. (c)2022 BookRags, Inc. All rights reserved.