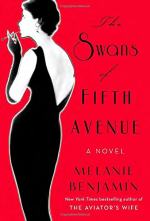 The Swans of Fifth Avenue Summary & Study Guide includes comprehensive information and analysis to help you understand the book. This study guide contains the following sections:

This detailed literature summary also contains Quotes and a Free Quiz on The Swans of Fifth Avenue by Melanie Benjamin .

NOTE: Citations in this Study Guide refer to the paperback edition of The Swans of Fifth Avenue, published by Random House Publishing Group, Jan 26, 2016.

The Swans of Fifth Avenue is a nonlinear novel comprised of 24 numbered chapters set in the past (the 1950s-1960s) with four chapters interspersed that describe a setting on the date of October 17, 1975—which is the main timeline of the narrative. All chapters are related in the past tense. The final chapter of the novel is set in 1984.

As noted in the opening of the novel, The Swans of Fifth Avenue is a work of historical fiction. “Apart from the well-known actual people, events, and locales that figure in the narrative, all names, characters, places, and incidents are the product of the author’s imagination or are used fictitiously” (Copyright page).

Following a brief preface, the first chapter of the novel is not numbered but introduced by its setting in “La Côte Basque, October 17, 1975.” Several women had gathered for lunch at an exclusive New York restaurant and were drinking champagne. They were shocked by an Esquire article written by Truman Capote exposing their secrets.

In the next numbered chapters, the narrative shifts back in time to 1955 and following years to describe how Truman Capote came to be friends among the social elite of New York. The narrator asserts that only Babe knew the true story of Capote’s miserable childhood. They had begun to attend parties together, with Truman gaining a reputation as a character—dressing in “velvet suits, red socks and absurdly long scarfs usually wrapped around his throat, trailing after him like a coronation robe” (14). Babe and Truman’s bond was solidified when Truman walked into Babe’s bedroom. They lounged on her bed to share confidences and Babe shared secrets that she never had before—not even with her two sisters.

While lunching at Le Pavillon, Ann and Elsie Woodward arrived and Truman told the ladies that Ann shot her husband Billy Woodward in their home, claiming she thought he was a prowler.

After spending a perfect day together, Babe tried to seduce Truman but Truman would not respond. Babe brushed it off, saying her therapist encouraged her to try it, but she knew that it would not bring them closer. They intended to sleep together in their undergarments, but first Truman tenderly removed Babe’s makeup, seeing her surgery scars. No one, not even Bill, had ever seen these scars.

In the summer of 1966, Truman wanted to celebrate In Cold Blood’s tremendous success, but realized he could not throw a party for himself, nor could he single out any one of his Swans to throw a party for him. So instead, he announced a Masked Ball at the Grand Ballroom at the Plaza Hotel, an event that would later be referred to as “the party of the century.” Five hundred guests were invited and given instructions to dress only in black or white. Truman schemed, planned, invited, and excluded people.

After the party, the papers wrote that Truman wouldn’t ever write anything serious again, and that it was appalling he hosted an extravagant party to celebrate a book about the grisly murder of a family. Random House pressured Truman to deliver his next book, but he had writer’s block.

Esquire made Truman a lavish offer for a story, and he began to write not his stories, but the ones his Swans had told him. In June 1975, “Mojave” received high praise, although most readers could discern that the thinly disguised characters were Bill and Babe Paley. Babe spent less time with Truman because she was now ill with cancer. Esquire begged for another story, and Truman, seeking more of a power-high and money, complied. “La Côte Basque, 1965” was both poorly written and contained people named outright, with the rest barely disguised. Ann Woodward read it and killed herself, clutching the magazine open to the pages of the article. Truman went to Hollywood to act in a movie. Liz Smith, the columnist, called to tell him about Ann Woodward’s suicide and he laughed. Not one Swan would take his calls. Soon after, Babe woke up knowing it would be her last day. She slowly put on her makeup and her family came in—her children and husband. She asked, “Where’s Truman?”

In the novel’s final chapter, “La Côte Basque, 1984,” the narrative jumps forward in time. Bill and Slim met at the restaurant, discussing their friends and distressingly realizing they were almost the last of their elite acquaintances still alive. Truman had died, and the rumor was his last words were, “Beautiful Babe.” Bill and Slim came clean, wondering if Babe knew they had had an affair and that it was them in Truman’s book. Slim fervently hoped Babe never knew, but admitted that Truman did what she never could: to speak the truth. And the truth, said Slim, was ugly. In the end, they raised a toast to Babe, to Truman, to Papa, and to all the other glittering, “prevaricating ghosts of the past” (334).