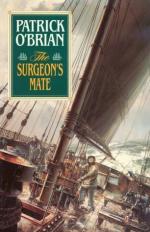 Patrick O'Brian
This Study Guide consists of approximately 36 pages of chapter summaries, quotes, character analysis, themes, and more - everything you need to sharpen your knowledge of The Surgeon's Mate.

This detailed literature summary also contains Topics for Discussion and a Free Quiz on The Surgeon's Mate by Patrick O'Brian.

Jack Aubrey, Stephen Maturin, and Diana Villiers enter Halifax, Nova Scotia, aboard the victorious HMS Shannon. They enjoy a heroes' welcome and then settle down to await transport to England. Maturin passes the time wondering about Villiers while Aubrey pursues an extramarital affair with the flighty Amanda Smith. Meanwhile, Villiers frets about her pregnancy by Harry Johnson. Finally, their transport sails to England, pursued relentlessly by privateers in the employ of Johnson. In Portsmouth and London, the three characters settle down to a period of relaxation and recuperation, Maturin meeting with his friend and confidant Sir Joseph Blaine.

After some few days, Maturin proceeds to Paris to lecture at a scientific academy. Villiers accompanies him and is established in Paris with some of Maturin's friends. While in Paris, Maturin is probed by various French agents but maintains a strictly academic role. Returning to England, Maturin finds Aubrey yearning for the sea. Blaine then enlists Maturin's assistance in a difficult situation involving Catalan troops garrisoning an impregnable Baltic Sea fortress (Maturin is Catalan). Maturin accepts the mission and enlists Aubrey as naval expert and captain. The two men repair aboard HMS Ariel where they are joined by a young Swedish officer, Jagiello. Aubrey finds Ariel well-crewed and efficient; Maturin finds Ariel a typical ship and teaches what little he knows of things nautical to the even-more-ignorant Jagiello.

The party proceeds to Grimsholm fortress where Maturin goes ashore by stratagem. By fortunate coincidence, the local commander is Maturin's godfather and the Catalans quickly defect to the British cause. Throughout all this success, Maturin pines for Villiers and worries that his depression is incurable. Under Aubrey's leadership, a small convoy bears the Catalan forces homeward. On the voyage, Aubrey intervenes in a nautical chase to bring a French frigate to heel, and then sails away into a mounting storm system unsure of his location. Unfortunately, Ariel sails on blindly into a maze of reefs and shoals and by the time Aubrey discerns their actual location the ship is doomed. Ariel strikes on a rocky shore and sinks. Her men are taken into French captivity. Aubrey, Maturin, and Jagiello are transported to Paris.

There, Maturin makes his presence widely known while Villiers—who has suffered a miscarriage—sells her beloved and immense diamond to secure Maturin's release. This muddies the waters, however, and eventually a French political faction intervenes to effect the three prisoners' escape. They join with Villiers aboard a shadowy English packet commanded by William Babbington, and head away to England and freedom. Just miles from England Villiers accepts finally Maturin's repeated proposal and Babbington marries the happy couple, Aubrey giving away the bride.

More summaries and resources for teaching or studying The Surgeon's Mate.