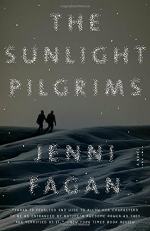 Jenni Fagan
This Study Guide consists of approximately 71 pages of chapter summaries, quotes, character analysis, themes, and more - everything you need to sharpen your knowledge of The Sunlight Pilgrims.

This detailed literature summary also contains Quotes and a Free Quiz on The Sunlight Pilgrims by Jenni Fagan.

The following version of this book was used to create the guide: Fagan, Jenni. The Sunlight Pilgrims. William Heinemann, 2016.

The Prologue of The Sunlight Pilgrims begins with Dylan first seeing Stella and Constance outside as they watch the three suns of the parahelia rise in the sky. This is the first sign of the coming of the worst winter in living memory. Over the course of the novel, the temperature drops from -6 to -60 degrees, as we follow the journey of survival that the characters must undertake.

The novel begins by following Dylan, still grieving his mother and grandmother, moves from London to the small town of Clachan Fells, where he has been sent by his mother, Vivienne to scatter her ashes along with her mother, Gunn’s. Both Vivienne and Dylan grew up in a cinema named Babylon, which Gunn acquired by prying the keys from a man who died trying to outdrink her when she ran away to London, pregnant, penniless and alone. Babylon has now been foreclosed on and Dylan has been left drowning in debt. However, Vivienne has left Dylan a caravan in Clachan Fells in which he will reside for the entirety of the novel. Constance and Stella reside in the caravan beside Dylan’s and they quickly become friends; while Constance and Dylan grow to be more than friends over the course of the novel. Dylan falls in love with Constance on his first night in Clachan Fells, when he sees her “polishing the moon” in her sleep. Constance is a single mother and provides for herself and her daughter by renovating and selling furniture taken either from the houses of dead people or from the city dump. She is skilled and resourceful, adamant that she will survive the winter. Her emergency supply of food and wood is what sustains the characters for the majority of the novel. She has had two lovers, for which she is terribly judged by the people of the town: Alistair and Caleb. Alistair is the father of her child but does not accept her for who she is.

Stella is Constance’s twelve-year-old transgender daughter, who is struggling greatly with finding her place in a world that doesn’t accept her. She is going through puberty as a boy and is very distressed by it, but the only doctor in the town will not prescribe her hormone-blockers to stop this and start her transition. To combat this, she orders nondescript hormone-blockers, which have an adverse effect and send her to the hospital. Through all of this, she is also in love with a boy named Lewis, who once kissed her but is now rude to her and afraid to love her back. She is resilient, however, and fights for her identity on all fronts, with the full support of Constance.

Vivienne also left her sketchbook for Dylan in her caravan. Inside, are drawings chronicling their lives as well as a family tree which says that Gunn bore a child of her brother, Olaf, and that this child is Vivienne. Olaf’s child from his second wife is Alistair: Constance’s partner and Stella’s father. This would make Alistair Vivienne’s half-brother and Stella Dylan’s cousin. Dylan keeps this secret to himself for the entirety of the novel but, in the last chapter, realises that it is likely that Constance has known all along.

As the private lives of the characters unfold, the climate continues to worsen as the whole world is blanketed in sheets of snow and ice. The largest iceberg ever seen outside the Arctic has drifted to Clachan Fell’s harbor and the temperature is decreasing steadily. Everyone is running low on food and crime is rampant worldwide as fatalities increase every day. The novel ends with Dylan, Stella and Constance taking shelter from a storm in Alistair’s cabin in the mountains, as they hold hands and finally rest.

More summaries and resources for teaching or studying The Sunlight Pilgrims.