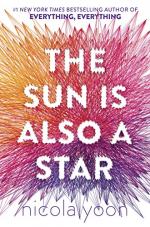 The Sun Is Also a Star Summary & Study Guide

The Sun Is Also a Star Summary & Study Guide Description

The Sun Is Also a Star Summary & Study Guide includes comprehensive information and analysis to help you understand the book. This study guide contains the following sections:

This detailed literature summary also contains Quotes and a Free Quiz on The Sun Is Also a Star by Nicola Yoon.

Note: Citations in this study guide refer specifically to the 2016 Delacorte Press First Hardcover Edition of The Sun is Also a Star by Nicola Yoon.

The Sun is Also a Star is a young adult romance novel by Nicola Yoon which delves into questions of God, love, and fate, as Jamaican-American Natasha meets and falls in love with Korean-American Daniel on the day she is due to be deported. Each section of the novel is titled by the name of the character who narrates the section, with several interspersed sections narrated by a third-person narrator who is presumably God.

When the novel begins, seventeen year-old Natasha leaves her family’s apartment to try to find a way to prevent their deportation. Their deportation has been brought on by a DUI her father received after drinking following a theater performance in which he acted, wherein he told the police he and his family were in America illegally. At the same time, 17-year-old Daniel heads out to get his hair cut and go to an interview with a Yale college alumnus. Daniel is under heavy pressure by his Korean-native parents who insist upon the meeting as Daniel’s brother Charlie has been forced home from Harvard for two semesters on probation.

Natasha heads to U.S. Customs and Immigration Services to see what can be done about her family’s situation, but is held up by Irene, a lonely security guard who is set to commit suicide that day. Natasha misses her appointment, but ends up meeting with another USCIS agent instead, who directs her to meet with immigration lawyer Jeremy Fitzgerald. While Daniel is on the way to get his haircut, the subway conductor, who has found God, urges his passengers to find God. Daniel decides he will look for Signs from God, and therein discovers Natasha. She has a shoulder tattoo that reads DEUS EX MACHINA (God from the machine) and heads into the record store Second Coming. Daniel takes this as a Sign and begins speaking with her. They immediately hit it off, though Natasha has other things on her mind. They are attracted to one another, but they are very different. Natasha is reliant on reason, science, and logic, while Daniel is faithful, creative, and passionate.

As the day unfolds, the two spend every moment possible together. They learn more about one another and begin to change each other’s lives for the better. For example, Daniel considers he does not have to do what his parents want him to do, while Natasha wants to find passion in her life like Daniel has. While Daniel considers their meeting an act of God, Natasha does not believe in God–though she desperately wants to believe in things like love. As the day wears on, she and Daniel realize they have fallen in love with each other. Natasha calls USCIS to leave a message of thanks for Irene. Daniel’s interview turns out to be with Jeremy Fitzgerald, who is ultimately unable to help Natasha. In the end, Natasha and her family must board a plane to return to Jamaica. Daniel and Natasha try to stay in touch and promise to pursue their romance, but time and distance cause them to fall apart.

Ten years pass. Irene, who did not commit suicide thanks to Natasha’s thank-you message, sees Natasha on a plane where Irene now works as a flight attendant. Irene thanks Natasha for the message all those years before. Natasha introduces herself, which catches the attention of Daniel, who is unknowingly sitting a few seats away. Natasha and Daniel recognize one another instantly.